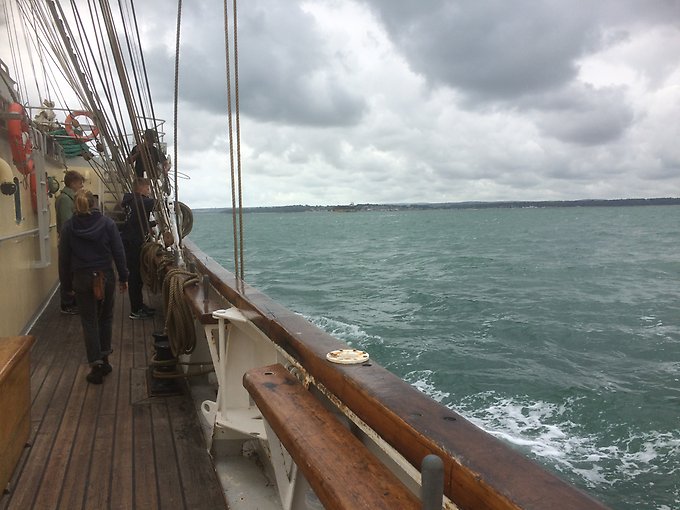 Today we departed from Portsmouth and now we are heading our course to Öckerö. Our watch (midskepps) was on duty first and we were the ones that had to make sure that the boat left the port. We set our sails but unfortunelly I was in the kitchen. Sara and I made pasta and pesto for lunch and then chicken and rice for dinner.

To the night-fika we made some nice choclateballs for our hungry watch. They ate it like animals and since we didnt want anyone else to get our choclateballs, we hid the rest of the balls that were left over. Also during our fika-time, Alicia wanted some juicy honey. But some girls in the portwatch had taken the honey. So we decided to teach them a lesson. We all ran in to their cabin where they had a lovely picknik. We stood there like pinguins and yelled "honey!". We grabbed the honey after some confused screaming and then Alicia eventually got her honey.

When me and my room mates had gone to bed, we got an idea. We decidede to challange each other. The consequqnses of this are the followings: Simon were forced to become a third wheel when two "friends" of diffrent genders were watching a movie. Then I had to go in to the girl's cabin and make some weird animals sounds.