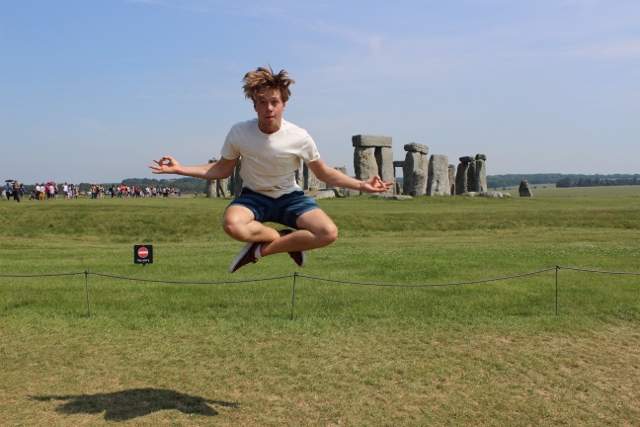 Woke up as always, hungry and tired, trying to get the day started. Today’s not like every other day, because we’re going to Stonehenge today and I’m really looking forward to it.

We left at 08.10 just right after the ordinary gathering we do every morning. The bus took approximately one and a half hour. I and some other fell asleep on the way there, which was really needed. Our teacher told us to try to stay awake to see the nature on the way there but the ones the were awake said it was not much to see so it was totally worth it to fall asleep. Finally at Stonehenge, we stepped out of the bus and the warmth hit us really hard. It was extremely warm but luckily I packed a lot of water.

When we got to the visitor center you had two choices, either to take the bus or walk. A lot of my friends took the bus but I decided to walk the 30 minutes walk to the stones. I went alone, took my shirt of, took out my camera, relaxed and just listened to the wind and sounds that surrounded me.

Everything was quiet and calm and I did enjoy it really much. You see, we are 40 students on a tight space, to get alone is a hard game. So when I got the opportunity to be alone for at least 30 minutes, I took it. Finally at my destination I found my other friends taking films and photos of the old raised stones called Stonehenge. It was actually more interesting than I imagined. I liked it and it felt like, hard to describe, but spiritual and religious place. It was a really nice sight and I got som cool pictures as well, you’ll see one of them in this blogg.

I Walked the way back as well, except I wasn’t alone this time. I had company with Arvid, the guy on the picture, and Otto. It was nice to have someone to talk to but at the same time be kind of alone and enjoy the nature. At the bus ones again, we left of to the town Sainsbury. Sainsbury must be one of the cutest towns I’ve been in. Old looking houses, not a lot of peoples and cozy restaurants. We had 2 hours to explore and then we hade to get to a cafe to have some afternoon tea. Which was extremely nice. I, as hopefully all of us, really enjoy a nice english Cream Tea. When we were done we had to go of to the bus right away. This time it took 2 hours to get back home. Listened to some music at first but fell later on asleep again.

Finally back home, the most of us took a short break on the boat, cleaning ourselves up. Fresh and clean we went out to check some stores and then sit down to eat. I took a Black Angus burger with Camembert and smoked bacon. My Gosh it was one of the
best burgers i’ve eaten. And since I walk 21 762 steps today, looked at my step counter on my phone, and haven’t eaten so much it was really needed. We chilled for a second and then went back to the boat.

Now I don’t really now what to do. I might just chill and listen to some music before I, hopefully, go to bed early. It has been a great day which I really have enjoyed. I have to
say that Portsmouth is probably one of the best ports we’ve been to but it’s still hard to say which one is the best since all of them are so different. But Portsmouth is so ”lay back” and chill, it has a lot to give and yeah, maybe it’s nice to know that we’re almost home, at least for some of us.

I’d love to stay on Gunilla for a month or two more. That’s all I have to say for today, so I’ll end this blogg with ”Hope u’ll have a nice one” as the english youngsters use to say.