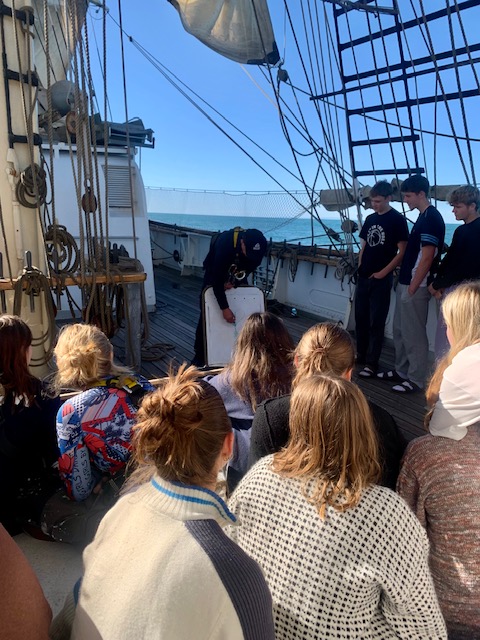 My day started like every other day I woke up around 7 am and then went to eat some breakfast were I ate 2 portions of porridge with sugar and cinnamon. There after our work day started on Gunilla.

Don’t really remember what we did at our first shift but probably something with the sails. After our work shift we went to eat some lunch which was a delicious soup which were amazing.

After lunch we’re allowed to do whatever we wanted on the bout because it was Sunday and we didn’t have any school which means I took that time and slept and watch some breaking bad. But in the middle of an episode of breaking bad, the man over board alarm started and I went up on the deck and realized it just were a test alarm as a training for us to know what to do if someone ever would get over board. After the test scenario I started workout with Erik and William to get those vanes and muscles for like 5-10 min. After the training scenario and workout session I went down to our room and watch the rest of my breaking bad episode.

Later I went eating some dinner were we had some meat stew which I don’t remember if it was good or not but I remember it was eatable at least. After the dinner I climbed up to the royal for the first time and it was really really beautiful up there because u could see England far far away and the sea was really calm and beautiful.

Then our next work shift started at 8 pm, that shift was actually pretty fun because I got to climb up on the sails for the first time at night but it was the royal sail like the sail that is the highest up and when you couldn’t see anything it actually was pretty scary. Then we just did some little more boring stuff like drag all the different ropes and stuff like that. Then after the shift I went to bed and my day ended.