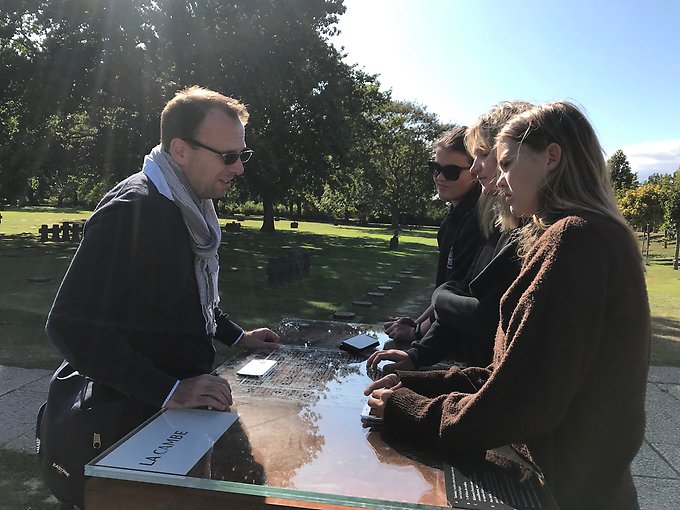 The Bayeux tapestry and The D-day

Today started a bit earlier than usual with the ordinary big breakfast in the big mess, and before I even had the time to blink I stood on the pier with my blue school uniform and heavy backpack filled with all the food for the day. We sat down in the big blue bus covered with paintings of umbrellas in all the colors of the rainbow, which was supposed to take us around Normandie for the day.

The first stop of the day was nothing less than the beautiful small village Bayeux, to look at the thousand year old Bayeux tapestry. The tapestry is actually not an tapestry but a 70 meter long broderi, and almost every one of us students found the old broderi just as exciting as we would find a new species of dinosaur.

After a quite quick visit in the old and big cathedral in the middle of the town, we sat down in the park to have a lunch our chef Pontus sent with us. When we were done stuffing our faces with pie, we sat down in the bus to see where the chauffeur would take us next.

After an hour in the bus we arrived to the American Graveyard, where about 2.000 white crosses are beautifully lined up with the names of those American soldiers who lost their lives on the day that is called The D-day. The graveyard was huge, and the though that behind every gravestone lays a man with a family and a own story will always be very mind blowing. We walked around the cemetery and every now and then you saw a star instead of a cross, representing the life of a jewish person.

After about two hours filled with emotions, the bus took us to Ohama beach, one of the beaches where the D-day took place about 75 years ago. It was extremely hard to realize the fact that 5.0000 people lost their life on the sand where we stood. The sea was just as blue as any other, but all I could think about was those young people who lost their lives way too early.

After the nerv wracking experience on the beach, the bus was headed to a place that we knew almost nothing about. After about half an hour, we arrived to the cemetery where 21.000 German soldiers were buried. A large mass grave was placed in the middle of the graveyard with a monument on the top, and this cemetery was nowhere near as large as the American. There was almost no names on the gravestones, which is a big contrast from the American cemetery, where almost every gravestone has a name written on it. There was also five crosses placed close next to each other at many places around the German cemetery, which represented a mass grave. But how many or who was buried underneath those crosses were not named.

After a long bus ride, which was the perfect time for a well deserved nap, we finally came back home to our beloved boat. Pontus then served diner, which was just as delicious as usual. When our plates were empty, we realized that the clock wasn’t as much as we thought it would be. So me and some of my closest friends headed out to wander the streets of Cherbourg for maybe the last time in our lives. We sat down in a café where we talked for hours about everything we had been through that day, and everything we have been doing here in Cherbourg. The sun had been down for a long time when we looked outside the window, and suddenly we realized that it was time for us to head back to the boat.

As we walked home to the boat through the beautiful old town, we realized how lucky we are for being able to see and do the things that we do on there trips. And after this day, I feel a little bit more grateful to be alive.