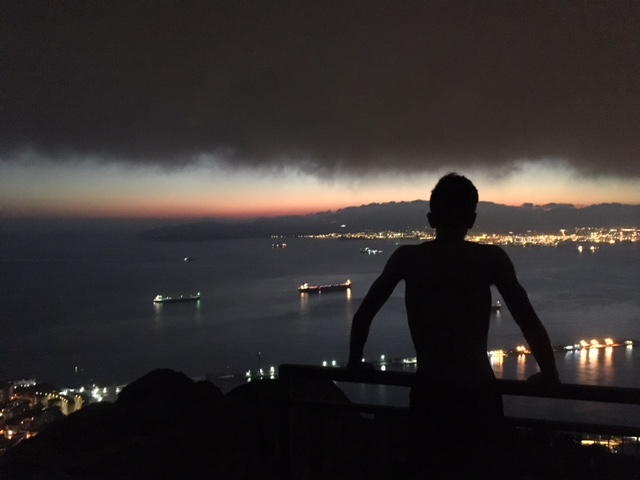 This has been a quiet day. Much needed for us in midship who had been guarding yesterday. But also, a day of opportunity to find some excitement here in Gibraltar or la Linea for those who have the day off. This is also Kevin from sjd1720s birthday so congratulations to you.

For me the day started already half past five with a two-hour guard. After I thought of taking a nap but then there was only 45 minutes to breakfast but while thinking so I fell asleep anyway.

After the morning routines the students from sjd1720 went on a school trip to the VTS station where they were showed how they worked with controlling all boats passing by here in Gibraltar which is a lot of boats.

Meanwhile I took the chans to get some compensation for the sleepless night I had and did not wake up until lunch. It is important to sleep, especially here on Gunilla where you need to stay sharp to be able to work and while off duty be a good friend which is important sense you have to be social almost all the time.

After lunch the most of us gathered in stora mässen to study, even the sjd1720 students how have a test tomorrow. Meanwhile styrbord went on working on deck scenes today where their shift. At port you work in shifts off every third days unlike how it is at sea.

After supper the temperature cooled down a bit so it was better fore going out. I had a goal with the day, to climb the mountain, and I managed to gather some people, stupid enough to come along.

We made or way into Gibraltar and took us through the city to start the climb. At first, we ran along rods up the mountain but then we came to some stairs lading up the last part of the way. We fought ourselves up the last bit filing the sweet pouring down the back but when we came to the top and could se the town beneath end all the way over to Afrika it was all worth it.

This has been a good day whit good wader, good food and good mood. Styrbotd have been productive at deck preparing the boat for the voyage at Friday. And everyone else has gotten some homework don and hopefully had some fun to. But now you have to excuse me so I can join the rest waching game of thrones, see you.