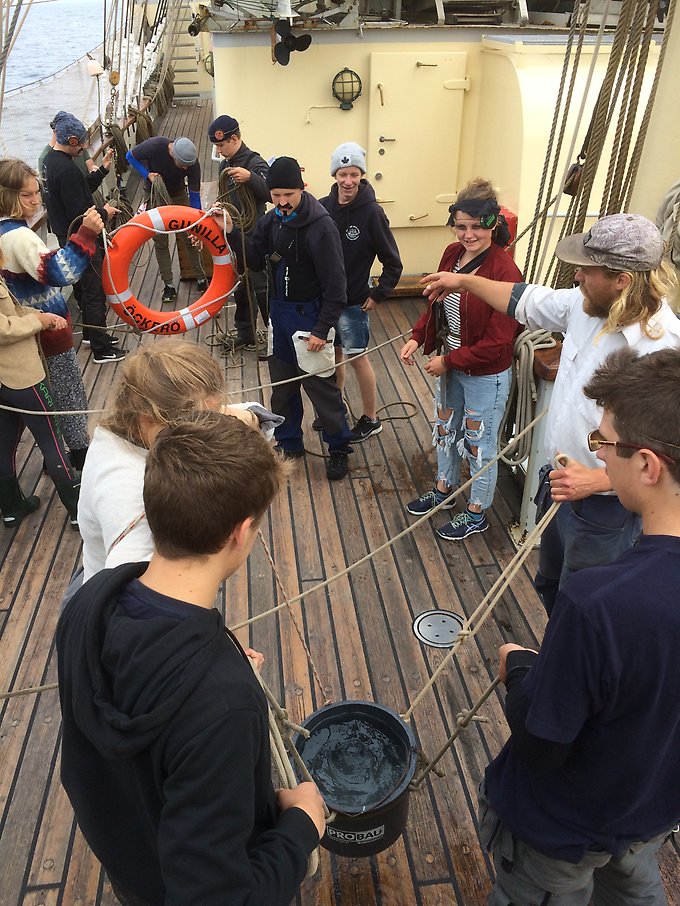 The day of the Games!

For three hours, all you could hear was the screams. The screams of joy, anger and pain was all in the air during the world championship in the Olympic games, it was the 2018 Gunilla games. The games were organized by the one and only trio of Adam, Mauritz and Sofia.

As always, the day begins bright and early for the 12-4 watch and as always are the weather disappointing. Almost no sails and the engine roaring our way to Portsmouth, but we tried to set some more sails, but they were quickly taken down again.
Something that different that happened was that the entire watch sat down in the bridge to watch the movie around Cape horn. The movie took 40 min and then it was time for the posts to see it.

Sleeping through half the day we once again had to go up to work. One hour later we got time to dress up according the games dress code. The theme were Pirates of the Caribbean or Master and Commander. Everyone tried to one up the next so they all looked amazing. Fake beards, fake scars and snus eye patches was all in the game for best costume.

First game of the day was knot relay, in which every watch had to make it through, mistakes gave a time penalty.
Next game were hawser stretching, the one watch who got it the highest from the deck won.

The third and second last game was three small contests. One was to get through a lifebuoy without touching it. Best time go to point on the score board.
Another was to throw a throwing line through a lifebuoy into a bucket of water all held up by the watch. Most times in the water bucket got two points.
Lastly the watch had to get a rope through every one’s clothes in the shortest time possible.

Most important of the day was the last game, the score board was portside had 6 points, midship had 5 points and starboard had 5 points. Anyone could win so the winner takes it all.
Adam, Mauritz and Sofia had rigged a rope, so the watches could stand on either side of the galley house. On three ready pull, it was tug of war that decided our fate. On top came portside white one point.