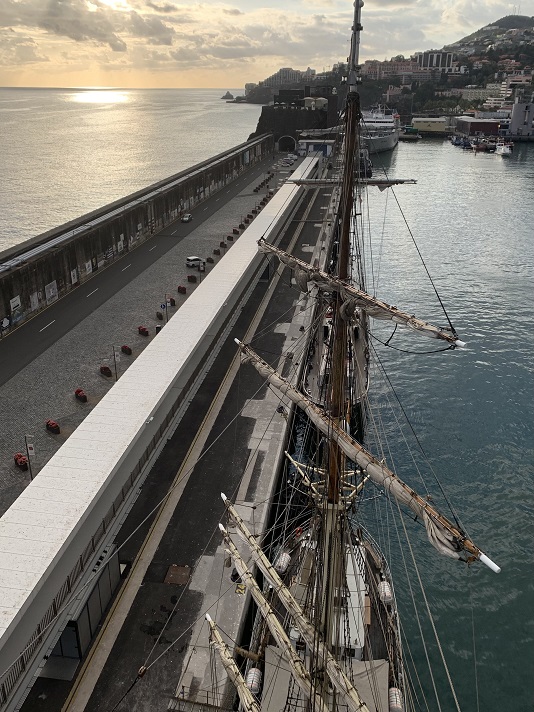 Life on T/S Gunilla can be hard to imagine if you’ve never actually beenon board. You can try to explain but you could never get a fully correctfeeling for how it is. I’m now going to try to create a picture as vivid aspossible.

The last thing I remember is that I went to bed pretty late last night. Actually, it wasn’t ​lastnight, it was the day before. It was the night before we left Teneriffe. All I have done sincethen is sleep. That's all I’ve been able to do because of the terrible seasickness and nauseathat came as soon as we left the docks. I slept through three freewatches each eight hourslong and every time I woke up it was time for another watch. I forced myself out of bed, puton some clothes and then just went up on deck. Finally there, all I could do was once againto sleep. The mere scent of food made me want to throw up.This morning, during another watch of sleeping and shaking like hell out of cold, I finally feltwell enough to lift my eyes and see the most beautiful sunrise while first mate Leo played themusic from The Lionking on a speaker. The movie has been one of my favourites since Iwas a little kid and I felt a positive feeling for the first time in two days. It was a mix ofnostalgia, powerfulness and at some point, relief. After the watch I felt a little better. I evenbrought myself up to eat breakfast and a few hours later I felt like a person again.

On the next watch, eight hours later I felt as good as new and I was ready to work. Ourwatch leader Felix asked me to do a job in the rig and I gladly took it. Working in the rig iswhat I like to do the most on our watches. It’s everything. It’s fun, adventures and a bitdangerous. You get a little rush of adrenaline every time you get up there. Not to mention theview. Climbing up those ladders makes me feel complete though the adrenaline rush isgetting smaller and smaller every time I’m up there. I always dare myself to climb higher,faster and more challenging to make it more exciting. #LivingOnTheEdgeAt sea the days float together like dry sand and you never really know what happened a fewhours ago or what happened two days ago. Most of the time you don't even know when oneday ends and another begins. That is one of the consequences to the weird sleepingschedule we have. Having the four to eight watch gives you six to four hours of sleep beforewatch and after watch and breakfast you sleep more. Then there is studying to fit into theschedule as well. The studying is mostly your own responsibility but some days in betweenwatches there are scheduled classes with our Dos. It is a strange feeling.

The days arepassing and even though you feel like shit, are super tired, feeling homesick or missing yourfamily and friends... your own bed!, you enjoy being on Gunilla so incredibly much. You canget sick of people over and over but still don’t change your mind about the fact that this isone of the best places on earth. You get very sick of people but since you live around themconstantly they become your family. On Gunilla it’s impossible to keep a face, which meansyou know everybodys true colors. Both good and bad. It makes it easier to know who youlike to hang out with and which people can become your closest friends.