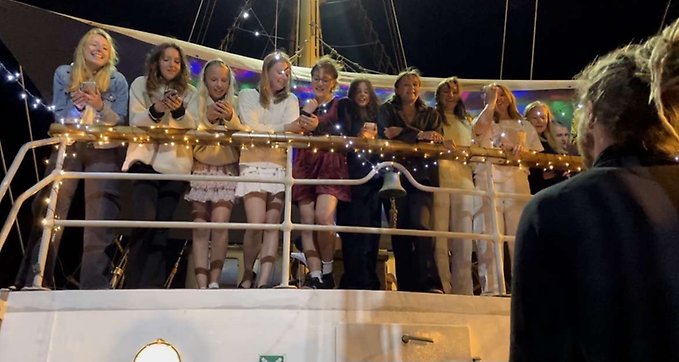 After seven days at sea, we were more than ready to explore a new destination, in this case, La Palma.

The sun was shining, the wind was still and all crew members were standing on the deck at eleven o’clock. It was time to see a new island. But because of the beautiful weather, everyone who could would make their feet lead them to the beach.

On the way there, me and some friends decided to buy some snacks. Yes, the snacks were our lunch. The skin felt like it was burning under the sun on our way. We all wanted some brown skin after the cold Swedish winter at home, we all were more than ready to get some colour on our skin. We therefore were sunbathing for quite a while. But lucky for me, I had put some sunscreen on. My wish was not to look like lobster. But unfortunately, everyone didn’t think all the way trough. Some of us were for sure going to look like lobsters the next day.

When we decided that we’ve had enough of the beach, we began walking back to Gunilla. Everyone was requested to go back to the boat for the BBQ party at six o’clock. Gunilla have never been so pretty. It was lights everywhere, disco lights, light loops and the moon light.

The evening began with us getting dinner. The food was delicious, it was potato salad and grilled meat. For drinks, we got a really tasty punch and soda. After the dinner, we did some partying, we danced, singed and laughed. It was so much fun. Then every watch had a little surprise for their commanders.

The midship’s watch was the first one to present their surprise, it was a song dedicated to their commanders. The portside and starboard did the same thing. But of course, the starboard watch was the best one.