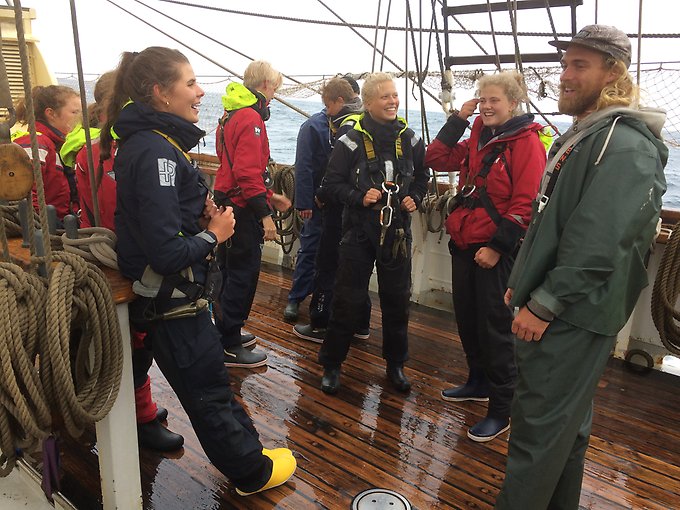 At midnight we in starboard went on watch and because of sickness and injury we were only five people in the workforce. Hans tells us right away soon will take in the Mizzen sail and after a short while we take it down.

Me and Leo climb up to tie it up, and a moment after we get down it is time for out night fika. Gustav and Nils made French toast, or as Hans told us they call it in Holland where he comes from “turnt over bitches”. After fika we take down another sail, and me and Petter go up to furl it. We give ti our best and when we get down we think that we are going to have a few minutes break, but it turns out the rest of the workforce has also taken down a sail and since it is so windy they need our help for it to look good. Together we tie it up and then lie down in a small pile beside the skylight on poopdeck.

At eleven Mattson came into our room and woke up with good and bad news. The weather was terrible, but it was pizza for lunch. Once he was out of the room I fell back asleep again and didn’t get up until I was woken by Lovis and Ida slamming the door shut twenty minutes later. I took the cup that I have hidden away in my bunk with me and sat down for breakfast/lunch. I sit in the little mess hall with my watch, Sofia and Hans while mentally preparing for four hours of freezing in the rain while I am post. It was a slow watch while we were waiting for the three o’clock fika that we were hoping and thinking would be something special since it it the Swedish National Day. Because of the occasion we were going to sing the Swedish national anthem and Sofia took the time when the weather didn’t allow us to do much else to teach us and Hans the words.

At three the watch got some time to heat themselves up with coffee and a semla that the chefs had made for us. I used my time wisely and managed to eat two semlor and drink my coffee in the fifteen minutes I was allowed to go inside. Once my fika was over there was only half an hour left before we were free for the day and as a lookout I could not only see and empty horizon, but also the workforce preparing to sing the anthem and raise the flag.

As usual we ring the bell eight times when the clock turns four, and when I am done with that I can hear people singing from across the boat. Looking towards them I see that not only is the Swedish flag rising, but also a black pirate flag with a white scull on it. I hurry inside as soon as Lukas has taken over my post, but even if I rush as fast as I can there is already a que to the showers when I get there shivering. I shower and then make myself a cup of tea to drink in the big mess hall while studying. In there a lot of people are doing their late school assignments, but even more people are watching a moving and eating snacks.

The evening goes on the same way until nine o’clock, when midships who just got on watch come inside to start cleaning. I hide in the kitchen with the backisar and listen to music and taste test the fika they are making. After eating ten o’clock fika me and a few more people from starboard go downstairs to cabin seven where two of the extra mattresses can fit perfectly onto the floor and make a perfect spot for watching movies.

The day ends when Mattson once again tells us to get ready for watch and I dress in as much clothes as I can. I put on three or four layers all over, but hours later it would turn out not to be enough.