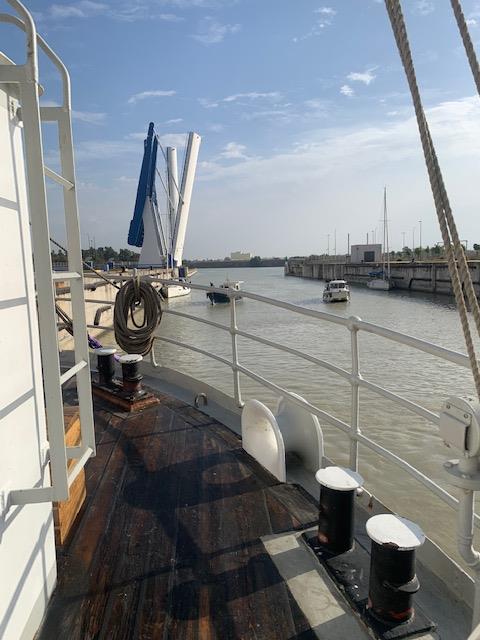 Today is the day we were supposed headed toward Marocko. But no, for the third time the course was changed away from Marocko. We are now the first ever class on Gunilla to be sailing up the canal to Seville.

Usually there’s a reason why something hasn’t been done before. That’s the case here as well, as sailing through the canal was pretty uninspiring. We did pass through a lock on our way up the canal. It raised us upp the one meter needed for us to continue up the channel.

This change of plans was caused by us not being made aware of the covid restrictions (yes, the still have those) by our agent in Marocko. However, I am very spoiled to complain about being headed towards a beautiful town in southern Spain. In Sweden, it is 12°c, rainy and dark at the time of writing after all. Here, it is sunny, warm and the sun is still up. So it feels wrong to complain through the remainder of the blog. Unfortunately though, the atmosphere onboard is still rather sour.

At 7 pm we were moored at the port close the center of seville. After a short watch change, Portside (me included) went on watch for a long and gruelling 45 minutes. For context, a regular days watch in port is closer to 10 hours in length, so I consider myself very lucky.

At 9 pm we had a movie night starring Leonardo DiCaprio and Tom Hanks in the movie Catch me if you can, which is a great film if you ask me. It is about a kid called Frank William Abagnale Jr who is the son of, you guessed it, Frank William Abagnale. The kid is on the run throughout the film from accusations about fraud and forgery. I can say that it has a good ending though without spoiling too much.

Other news is that the entire rig is now fully tarred and we are now moving to refinish the lacker on the pin-rails, a job that is about a million times more pleasurable. It is so satisfying to scrape away the old lacker and being the nicely preserved wood underneath. Anyways it’s now late, so it’s time for me to head down to my bunk.