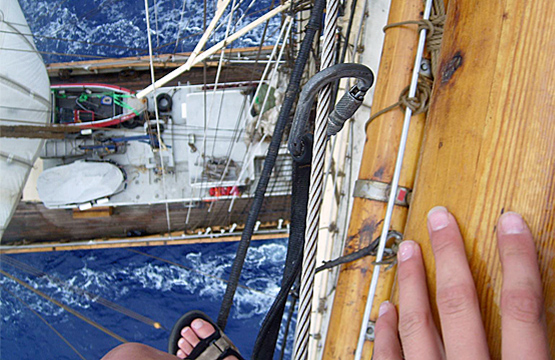 This is our time

When you are standing on deck and look up at the top of the mast you may think that it is far up in the air.

When I saw it for the first time all I wanted to do was to climb all the way up. However, no matter how much you want to climb up to the royals nothing can prepare you for the shock you get the first time you glance down at your friends on deck. One misstep and that's it, the fall would most likely be the most adrenalin filled moment of your life and also your last.

It's 3.30 A.M, unwillingly we get out of bed to relieve our friends of their duties. Five more minutes became ten and soon it was five minutes until we were supposed to be in formation. I throw on my working clothes and dash my way up to deck. ”Who goes there” shouted the lifeguard. It was standard procedure to say your name when going out in the dark but this morning it slipped my mind. ”It is Adrian” I shout back as I stumble in the dark towards our formation.

”Alright, today we will be raising the royals before dawn and I need three volunteers” Said your Commanding officer.

”I want to go” I responded quickly for I was eager to get up there.

The weather is very cloudy witch means that the actual dawn might not give us the light that we need. Since our visibility is limited we wait until 5.30 A.M until we start our climb. Although it isn’t windy the sea gave us some large waves, those waves felt like much on deck but while you are making the climb the waves presence is noticed more and more as you get higher and higher.

I get challenged by my friend on the way up to climb ”Jakobs ladder” (that is the highest ladder on the entire mast). Naturally I accept and I scale it quickly. Just as I was about secure myself up top we get hit by the largest wave yet, I feel the adrenaline rush through my entire body and I hold on to that ladder for dear life. Five seconds became an eternity but, I successfully held on and secured myself. Every once in a while the light of the sun breaks through the clouds and the sea glimmers. It truly is beautiful and I almost got carried away by it but, my commanding officer shouted from the deck ”Oi, the sun is rising and we are behind schedule. I know the view is stunning but we have got work to do!”

I climb down three meters to the royal sail and I say to myself. "One misstep and that's it, the fall would most likely be the most adrenalin filled moment of my life and also my last. So lets not miss step, shall we?” I release the knots and make new ones to secure the rope that otherwise would be swinging freely. I glance at the sail one last time to make sure that nothing is stuck. Luckily nothing was so me and my friend could climb down.

This is what we have been doing for a while at sea, it may be though and far from home but it is something special that we all will be glad that we did when it is over. Today is the last day to start in 2016 and begin in 2016, as we enter a new year we grow closer to each other. This is our time.