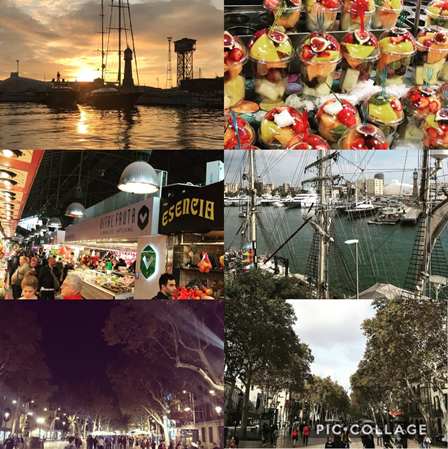 True touristing after an interesting meeting with students in Barcelona

A day in Barcelona with many new impressions about the Catalonian people, the current situation here and the youth in Barcelona, with a touristic inspired walk by La Rambla and with peaceful calm chilling in the big common room that as usual was characterized by Game of Thrones.

After today´s traditional line-up we took a short walk to Barcelona´s Maritime Museum, where we met up with Catalonian students in the same age as us. We began with entering the museum where we were met by the man who organized the whole thing, he spoke for a couple of minutes and then we had like an icebreaker task. The icebreaker was to mingle around and ask questions to and about each other. We were quite shy and didn´t really dare take the first step into a conversation at the beginning but just after a couple of minutes the atmosphere had changed completely, and everyone walked around and developed new friendships.

After a while we were divided into groups, and got a new bigger task. The task was to walk around in the central part of Barcelona and take pictures of several things and post them on Instagram. The task itself wasn´t so exciting but I got into a deep conversation and got to know Victor, Ferran and Biel who were the Catalonian pupils in my group. We talked about our cultures and countries, they talked and we, the Swedish students, asked many questions about how everything work here in Barcelona, what they thought about the current situation here in Catalonia, their future and how they see the and think about the society. It´s one of our tasks during the voyage to get an overview on what young people in other countries think about their and their countries’ future, therefore were we extra interested when we spoke about these things. Afterwards all met up once again at the museum, where the winning team was announced and we all looked at each other’s pictures.

Our newly won friends later followed us to Gunilla where we showed them around and told them about the special life onboard. We ate lunch together and I think everyone had a great time together.

When we had said goodbye to each other and they had left, almost all the guys who didn´t have watch left the ship to explore Barcelona. I didn´t stay at Gunilla either, me and a few lads decided to take walk along the main street of Barcelona, La Rambla. The street was fully crowded by tourists, the restaurants were packed and the many stores on the street offered the same souvenirs and T-shirts, from the bottom of the street to the very end.

For the fourth time during our visit we went to the big market. I must say that the market is my favourite place in Barcelona, I love strolling around among the small stalls that offer fruit, special Spanish ham and much more. The best thing is the very cheap and fresh fruit salads, I´ve bought one of them every time we´ve went there.

We returned to Gunilla just before dinner and after that many of us sat down in the common room. We watched Game of Thrones and had a good time hanging out.