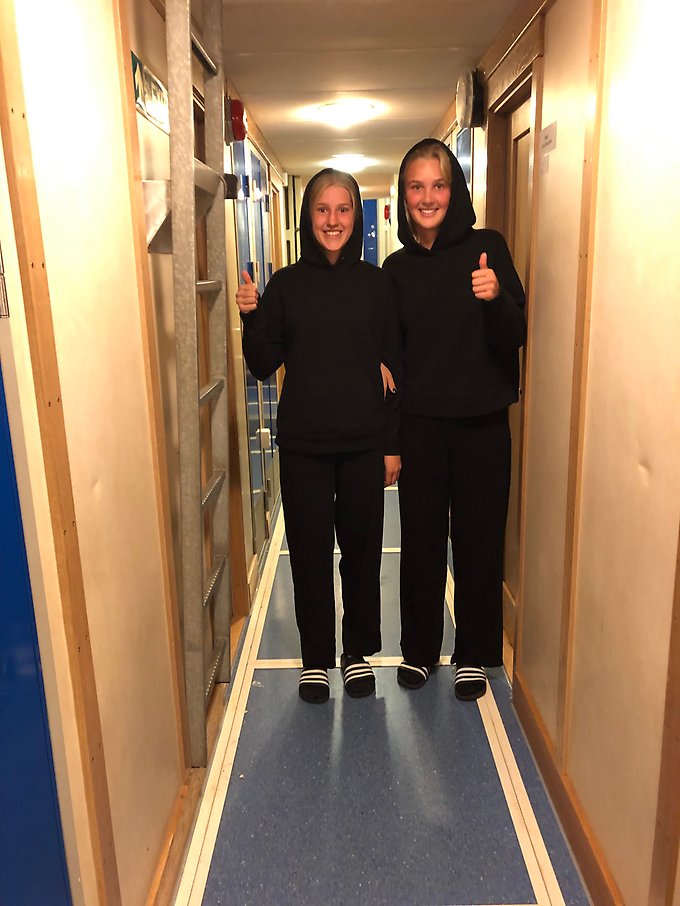 This day has been containing pretty much work in the pentry, at least for my cabin-buddies and me.

Speaking in other terms, the Port-watch was on duty today. We served a lot of great food, and some really appreciated cinnamon buns for the students of the “Portsmouth Grammar School”. As an ending of this busy day, my “twin” Alva and me got dressed in the same outfits to get reactions from people.

The day began with breakfast together and since the whole cabin of mine was going to be “backisar” (the ones who help the chefs in the pentry), Svea went to get our special clothes for being in the pentry. When we had been on the line-up and gotten rid of all the breakfast it was time for a meeting with Pontus – our chef – to prepare the food planning of the day. We also agreed on which times it would be time for us to have breaks. I got the 1 – 3 pm break, which I was very grateful for.

While Ebba was on her break, Svea and I started with lunch preparations; my responsibility was to cook the rice. Difficult, right? Svea chopped the vegetables. The lunch was going to be served as fried rice, so we had a pretty lazy couple of hours because of the small amount of things to do.

By 1 pm when it was time for my desired break, I went up to “backen”, in English it’s called the “forecastle”, to make some phone calls home. Now when about half of the trip is behind us, I have gotten a bit homesick. It’s not so bad since I know we’ll be home soon, but still it’s hard to not feel anything.

After a bit of catching-up with one of my sisters, I went down for a nap and felt the scent of cinnamon on my way through the boat. After all, I kind of regretted taking the 1- 3 pm break. The reason behind the buns was the upcoming visit from the students of “Portsmouth Grammar School”. Right after my return to the pentry, it was time for the students’ arrival and by then the cinnamon buns was ready, straight out of the oven. If I’m being honest, it could’ve been the best cinnamon bun I’ve ever had.

I treated myself with a necessary shower after this long day in “Byssan” (the pentry). The very last thing I did before going to sleep was spending some time with Alva. We often get to hear that we look alike, so we came up with this brilliant idea of dressing up in the same outfits and see if we could confuse or fool anyone for being the other person. It didn’t work out very well, but at least we had fun. But, who really is who?