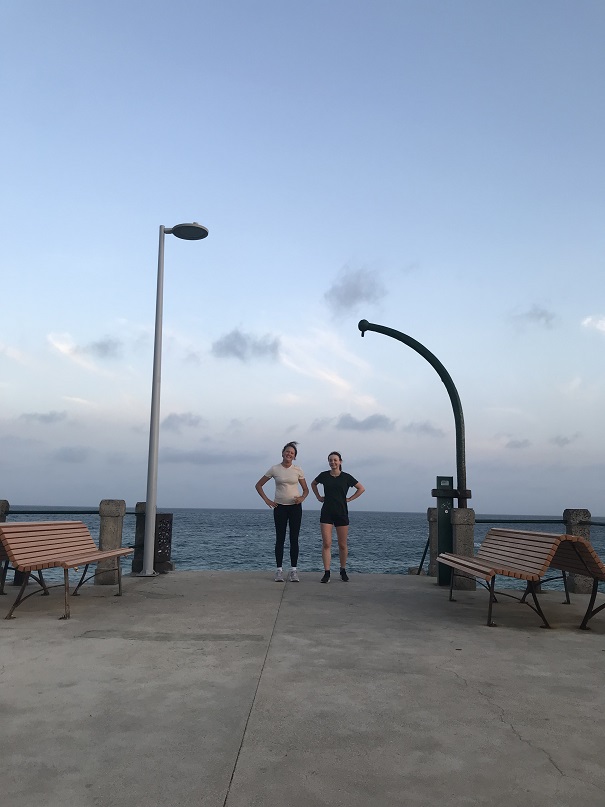 Unordinary events on an ordinary day

There were many things that were out of the ordinary the night of the seventeenth. First of all, we were woken up by Felicia at half past one instead of half past eleven. As you may understand it’s never really a pleasant feeling to wake up knowing you’d put not only yourself but fourteen of your beloved friends in big trouble if you’d decide to just sleep in instead of doing your duty.

. But there are things that make waking up more pleasant. For example the calming voice of Felicia, or the knowledge that in only two hours’ time, you’ll be able to sleep again. Since it was only supposed to take about ten hours to go from Funchal to Porto Santo, we split the watches of the night in half, in people as well as in duration.

Up on deck the unordinaryness continued. The bell was hit only four times, and then the different posts were auctioned out haphazardly instead of being predecided by our usual watch schedule. I ended up as lookout and found myself watching the lights of Madeira slowly disappear behind us. Then the bell rang five times and Isa came to take over the lookout post. When I returned to half deck our watch leader Aleksander took me, Ida and Sara on a so called tamprunda, double checking we knew the name and purpose of every little rope. But when we got to main deck the two gigantic fender sausages laying there took our interest from the ropes. Instead we threw ourselves on the fenders and made each other roll around in the rubber. After a while the others settled on one end of the fender, making the other side a perfect nest for me to crawl up in and of course not sleep on watch, but just rest for a while with closed eyes, until it was time to be guardian of the life boys.

Due to the winds blowing strongly and wrongly, we arrived to Porto Santo a couple hours later than expected. This created a golden opportunity for those of us who were off watch to sleep until we woke up naturally, which was absolutely lovely. Most of us spent the afternoon on the sunny, sandy, windy and warm beach.

The day was very peaceful until around eight when Sara, Elina and I went out for a run. We ran along the beach and out on a pier, stopping for a little swim that proved to be more dramatic than expected. The lest step from the pier into the ocean felt higher when you were trying to climb up it than when you jumped into the water from it, and it was also all covered in algae, making it very slippery. Since it was windy the waves were relatively big and on top of that, the guy standing on the pier staring down at us didn’t make the whole experience more comfortable. While in the water, the thought struck me that if the guy would have wanted to, he could have easily ran down the stairs and taken our things, leaving us with no other option than to make it back to the boat without our clothes, which was a thought that first frightened me but then amused me so much I almost was a little disappointed when we finally got up on the pier again. The picture in my head of us three running through the town and getting back to the boat completely naked was just too weird. But I was of course very relieved that that imagined picture didn’t turn into an actual memory.