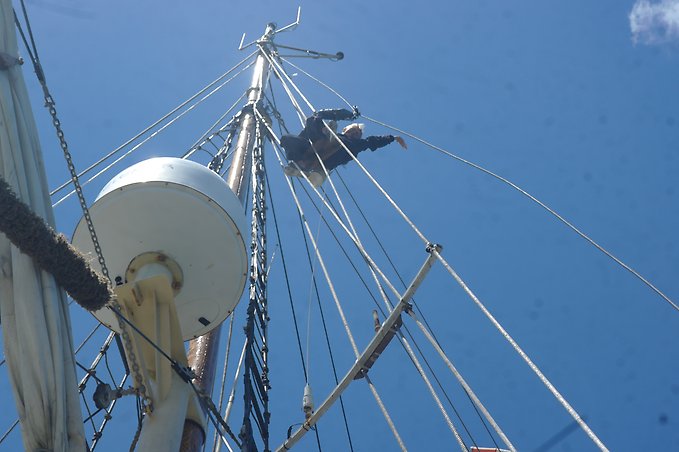 Up where I belong…?

Today Midship had to stay and work on the boat. The first thing I got to do was to get a plank with four ropes in it and hang it outside of the boat. Then I climbed down and Maja handed me some paint. I also need to admit something here, I was almost freezing to death. I think we might have had a colder morning than you, back home in Sweden. Because when we woke up this morning it was 13°C outside. Nothing we’re used to at this moment. It was almost as we wanted the broken AC back. It was also a big temptation to just jump into the water which had a temperature of 22°C.

Oh well, when I sat on the side of the boat the sun soon broke through the clouds and warmed us up. It was when I were done with the first thing I was supposed to paint, me and Maja heard a strange sound. We looked into the water where we saw some dolphins swimming around. We though it was really cool until our chef here on the boat told us what they were actually doing. They were having a bit of a fun time with each other, mating. We also got some trivia facts, that the dolphins are the only animal besides human that actually mate for the pleasure of it.

With the boat all painted and ready, me and Maja where supposed to take a similar chair and send it all the way up the mast at the back of the boat. Then I climbed onto it and was eased down. I was going to fix some wires with white daub. It was really funny, at least when I sat in the swing. The problem came when I was supposed to climb up to it, I didn’t have any good place to secure myself and it was really stormy. I also had clothes that were way to big and I couldn’t get hold of the things I was supposed to. The boat might therefore have heard some curses. But that’s an important part of Gunilla, to just do whatever you’re told.

Like when your later being told to clean the whole boat. You just have to do it. Although since we’re many people and everybody wants the cleaning to be quick it goes kind of well. After the cleaning we ate dinner and after that some of us followed Jonatan to a Swing dancing class. Since we’re tired pretty much all the time here, we got to bed soon after we returned home. It was nice to get some sleep, although I needed to wake up in the middle of the night to take my nightshift.