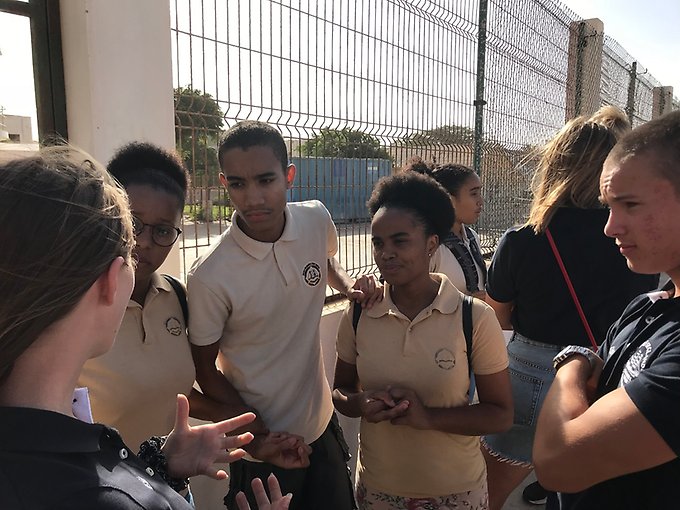 Today we had our first school visit at the Jorge Barbosa school. We sang, ate and had a wonderful time!

Today it was our, port watch’s, turn to have watch. As usual the work that needed to be done was maintenance work and cleaning, but I don’t mind. I actually think it’s rather fun!

Then at about 02:00 pm we finished our watch because we were going to the school Jorge Barbosa. Everyone was very excited because this was our first school visit! When we got there we got a tour of the school. It was quite big and very nice. Then we got to play some football with them. It was very fun, but also very hot! After that, we just walked around and talked to the students. It was very interesting and I learned a bunch of new things. At the same time there were some students who were singing and playing the guitar. Later, we all gathered round and sang together. It was really cozy. And then, one of the best things happened! We got to eat different kinds of snacks, and it was great because I was super hungry!

Then, the students and some teachers followed us back to Gunilla and we gave them a tour and then we ate cinnamon buns, which was delicious! The we just walked around and chatted with each other and after a while they went away. Then we finally got to have dinner! It was chicken with rice and some kind of sauce that was served. After dinner I took a shower and went to bed quite early.