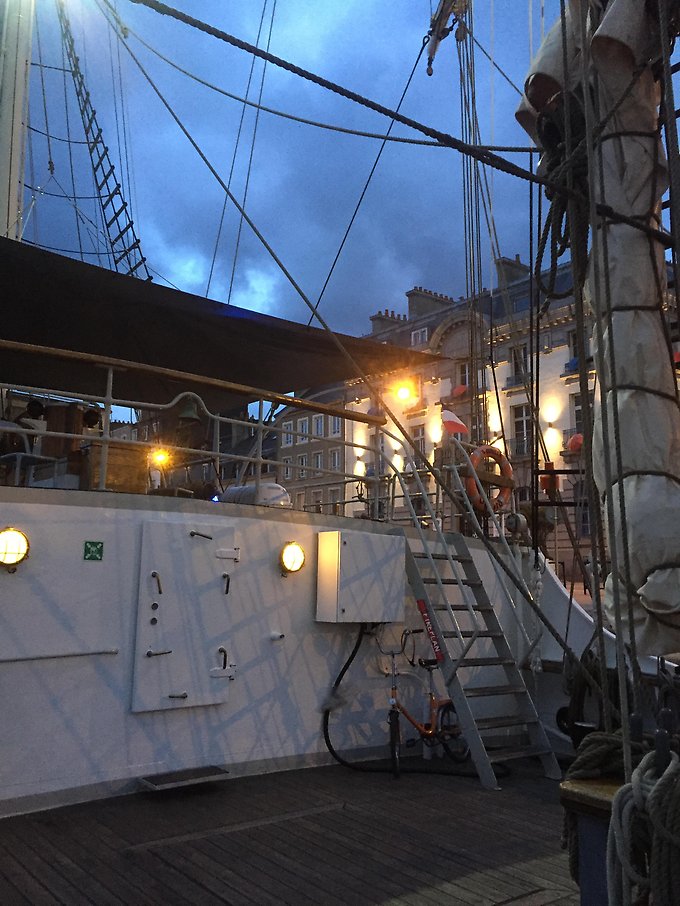 There are some fun days and some boring days on the boat and then there is today's watch. After doing the same work for 8 hours I'm more than happy to go to bed and sleep for the rest of the day.

Well this watch was not even a little bit exciting; I did three different things in 10 hours. It all started as usual with the breakfast at 07:15, I ate the same boring yoghurt as always. I had a little bit of time to kill after the breakfast, so I went back to my bed and slept for about 15 minutes. After my short nap I rushed as usual to get ready for my watch, I put on 3 layers of cloths because I was told that it was cold, I brushed my teeth, tied my shoes and put my harness on.

When I finally was ready for the watch I rushed up the stair and on to deck where we strike 8 bells and hoisted the flags as usual in the morning. That’s probably the most exciting things that happened during the whole day for me. After the daily morning routine we got our first orders. I was ordered to paint the turnbuckle on starboard side, it took about 15 minutes to prepare and 20 minutes to paint. So, with that done I had 9 hours and 25 minutes left on my watch.

The following order I got was to grind the whole bulwarks with sandpaper. I wasn´t alone to do this, we were about four people that grinded the bulwarks, but it still took us about 8 hours. Ture and I were the ones that grinded port side whilst Svea and Agnes were the ones that grinded starboard side. It was the same procedure all the time so I got bored quickly and me and Ture started to compete on who accidentally dropped most sandpaper in the ocean. It wasn´t the best idea of a competition as it pollutes the ocean and destroys the climate, but it made the 8 hours go a bit faster, the results of the competition ended up being a tie, we accidentally dropped 4 each. That was basically the most exciting things that happened to me in those 10 hours.