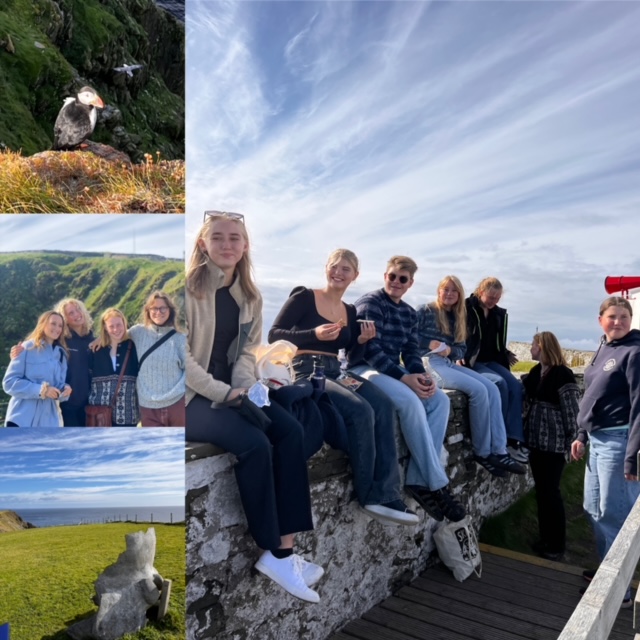 Two fantastic days had already passed in Lerwick, Shetland, and this was the final day. A day that offered a bunch of adventures. Although a lot of people in Gunillas' crew were happy to finally be in port and not feel seasick anymore, most people were excited to finally set sail for Iceland. But first, we enjoyed the long-awaited trip around the
Shetland Islands!

As a member of my dear starboard watch, it was my turn to guard the ship during the night. The shift started at 6:30. A bright, refreshing morning with sun and blue sky. Once everyone had woken up, it was time for breakfast and later, an assembly on deck. At assembly we were told about today’s plans, raised the flags of Shetland and Sweden and concluded with striking eight bells. It was finally time for us to leave.

The kind bus driver Carl picked us up with a coach and soon all the cameras were brought out to photograph the fantastic view. The narrow and winding roads were surrounded by amazing green landscapes, high hills and an incredible number of lambs. We stopped every once in a while to enjoy the beautiful surroundings. Among other things, we visited a famous ruin from a Bronze Age, a beacon known as a “Broch” and we even saw several puffins! In addition, we saw seals, cows and Shetlandponies! That was pretty awesome!

As the excursion went on, rumors began to spread about stopping to go swimming before returning home. Even though the sea water temperature is significantly colder here than at home, the number of people agreeing to go swimming increased steadily. I mean, who doesn’t want to brag about bathing off the coast of the Shetland Islands?

After a long day of ‘ooh’ing and ‘aah’ing at the beautiful landscapes, we were now ready to go home, eat and shower. We said goodbye to the driver Carl and arrived at Gunilla. There we were greeted by a fantastic surprise. Our friend Malva had finally joined us! We had missed her so much! I believe that her arrival has given us all the energy we need to continue north on our way to our next stop, Iceland.