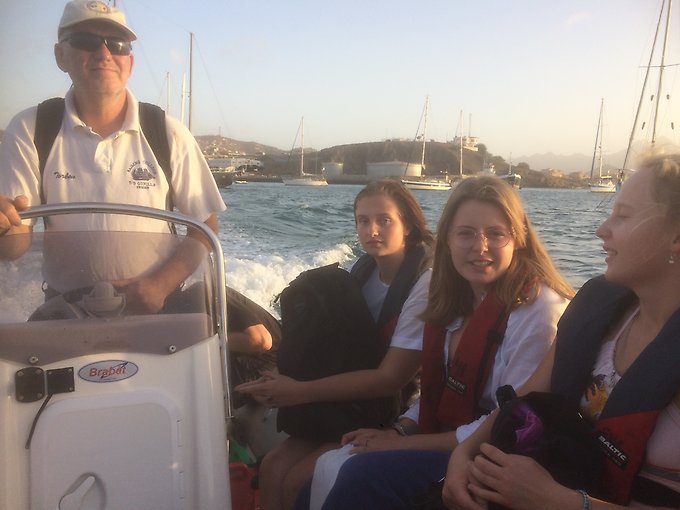 Today´s happenings are all the ingredients of a regular day on land on this journey; I cried of homesickness, brought myself out of my comfort zone, ate ice cream, feasted on wi-fi and tried to study.

We arrived to Cape Verde yesterday and anchored outside of Mindelo. I have the watch that´s from four to eight in the morning and afternoon. I usually wake up at 03.30 in the morning, but today I woke up at 7 o clock because all of the watches eat breakfast together at that time when we´re in port. Me and my friends sang for a girl that turned 16 today! Her roommates made breakfast for her that she ate in her bed. It included plenty of Nutella and chocolate, it looked delicious compared to my not so festive oatmeal.

We had formation at 8 o´clock. Our captain explained today’s schedule. I´m in the midship watch, so I had a day off today. Me and some other friends got a ride on one of the smaller boats on Gunilla, her name is Berit. One of the watch leaders took us to the harbour and it splashed up water on my entire back. I got so wet on the ride that you could see my toy story underwear through my yellow pants. I put a towel around my waist, so it was fine, but I looked strange. We went directly to an internet café and ordered some ice cream. We spent a lot time there – calling our family, doing homework, downloading movies and music, etc. We also talked to a stranger about Gunilla. He had talked with some of the adults on Gunilla. I felt proud of myself talking to a stranger in English because I´m very self-conscious and shy. I´ve learned the importance of challenging myself during the recent three weeks on Gunilla. That has made me grow as a person and made me stronger.

When we were finished at the café we went to a restaurant. I wasn’t that hungry, so I ordered a toast. It was very cheap but took a lot of time to get. Cape Verdes moto is “no stress”, which is apparently taken seriously. Then we went to a supermarket. I bought water and cashew nuts and headed to the harbour and Gunilla. The birthday girl requested lasagne for dinner, and it was very tasty. I thought about my dad during dinner because it´s his 50th birthday tomorrow. We´re leaving Mindelo early in the morning to go on a hike on an island nearby. We´ll sleep one night on the island in a hotel that we have to fix on our own. I don´t know if I will be able to call him, so I felt a little bit down. I feel like I´m missing a lot of stuff at home, but then I think that they (my family, friends, etc.) miss more. I mean that there will be more birthdays and Christmases, but not a lot of people sail over the Atlantic Ocean.

After the dinner, my roommate Mira asked if we could watch her favourite film called Kon Tiki. Mira had been trying over and over to download the film on her computer, but hadn’t succeeded, until another girl said that she had the film. The moment she knew that she could watch Kon Tiki she brightened up like the sun! It was nice seeing her that excited. We hadn’t had time to watch it, but tonight was the night. We popped some popcorn and sat down with blankets in front of the screen. I´ve seen Kon Tiki before, but I had forgotten what happens, so it was fun watching it. We watch movies a lot together, the entertainment on the boat is quite limited. I don’t get much free time and I try to prioritise my health (especially when we´re at sea). I´ve never appreciated sleep and food as much as I have done on Gunilla! You have to eat and sleep properly to have enough energy. The life on Gunillla is tougher because you have to adapt to out of the ordinary routines. I´ve gotten used to it at the moment, but I gain more and more appreciation each day.