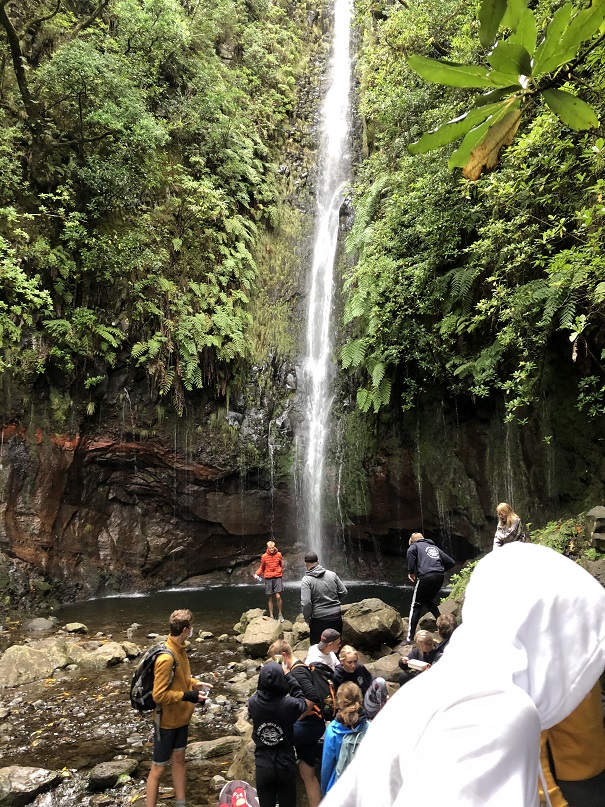 A change of plans

The day started as usual with being woken up at 7 am and having breakfast at 7:15. After breakfast we had line up at 7:55, our Captain told us that there was change of plans. Instead of going to Malaga and Tarragona next we are going to sail to Faro and Lisbon. Then our Dos told us about the trip we were going to do today.

The buses left from the port at 9 am and we had a one hour buss ride ahead of us. One of the first things we noticed was that there was a large very noticeable rainbow. During the buss ride we stopped at a grocery store where a lot of people bought snacks for the hike later on in the day. When we almost were at the top of the mountain that we were going to hike, the buss stopped because there was a cow in the middle of the road. The cow quickly moved to the side and we could continue on the steep and quickly turning road to the top of the mountain. As the doors on the buss opened we quickly noticed that it was much colder than we thought it was going to be. When I stepped of the buss I felt the cool wind coming towards me rapidly. The sky was covered with gray clouds and that did not make the weather for the day feel very promising.

We were all eagerly waiting to start walking so that we could get a bit warmer but we quickly realized that just walking down hill wasn't going to do the trick, we started to skip and do all sorts of funny looking things to warm up a bit. The further down the hill we got the less windy it got and we were all relived, we were walking along a road at first but the road came to an end and it turned into a path in the woods. We were walking with a goal to come to the bottom of a water fall, our guide showed us a lot of plants that are similar to the ones we have at home in Sweden. He showed us a variety of different things for example spots where you could see the valley, where we were going to walk during the day and other beautiful places along the path.

When we got to the waterfall we were all hungry, cold and a bit tired from walking up and down a bunch of stairs and along the path on the mountain. But the delicious lunch and the beautiful view seamed to make everything very peaceful and nice. We started to walk back and after a while of walking up the stairs we walked down before the weather took an unpleasant turn, it stared to hail. The small pieces of ice made a nice noise when the hit the leafs. The hail soon turned to rain and we all got cold again. But the long walk up the stairs helped us keep warm, after a while we got to a cafe where we could pause for some time. The weather just kept getting worse so instead of walking the last bit to the buses we got a ride in a mini buss. Everyone was very happy about this because were a bit tired of waling in the cold and the rain.

Gunilla I was really excited to take a hot shower and lay in my bed to heat up again. Me and a few others were waiting for a shower to become free and we thought it was taking

an awfully long time for people to shower. When the first person came out the shower they said that their was barley any water come out of the shower head. We were all a bit disappointed. I showered as quickly as I could so that the line wouldn't get to long. The attempt at a hot shower didn't really help to warm anyone up so we all laid in our beds under the covers or with a blanket in Stora Mässen until dinner was served.