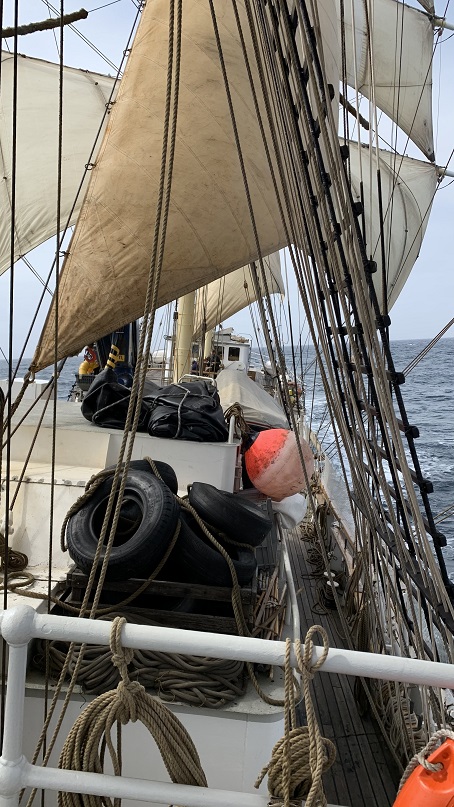 Your guard shift is over. You're laying in the big messroom, studying or perhaps watching a movie, just as usual. Suddenly, the boat is shaken by a loud, powerful voice. “All students, all students, all students. This is the second mate speaking. All hands on deck, we are doing a tacking (a kind of difficult way to turn)!”

The day began just as my days on Gunilla usually do. I was woken up at seven o´clock by a enthusiastic member of the port guard. “Get up, get up! It's time for breakfast! One hour left until your shift, and the winds are strong!”. I promptly ignored him. I was tired, and I knew that I would be able to eat breakfast later, at ten o´clock. I´d rather get some extra sleep than have a bowl of porridge and then sit about waiting an hour.

The first shift of the day went well. We set some sails, played some games and climbed the masts. All the things we usually do on our watch. At ten o'clock I ate breakfast. After the watch I went to take a shower. Homever, before I could turn on the water, a loud alarm started sounding across the boat. I recognized the ringing as the fire alarm, and wrapped a towel around myself before running up to the deck. The captain and first mate counted everyone, and then announced that SOMEONE in cabin four had sprayed out a huge load of deodorant, which had triggered the fire alarm. I felt a shiver down my spine. Cabin four is my cabin.

Later, it turned out that it was my cabinmate that had triggered the alarm by accident. I went back in and put my clothes on again, because I only had four minutes left until lunch by then. At 12:20 o'clock I ate lunch. After lunch, I proceeded to take a shower. When I got out of the shower, I realized that it was time for the first lesson of the day. I grabbed my stuff and went to the big messroom to study math. A couple of hours in, we heard a familiar voice streaming from the ship speakers. “All students, all students, all students. This is your second mate speaking. We are about to do a tacking, and we´re gonna need all hands on deck”. It seems like Lukas really loves the title of second mate, which is understandable since he worked really hard for it. Once all (or at least most) students had gathered on deck, we were given different tasks. Some were put on hold at the buntlines, while others had to haul the braces.

We hauled away, and tried our best to successfully complete the tacking. Homever, we didn't have enough speed, and didn't haul quick enough, so rather than being successful in the tacking, we ended up losing all our speed and coming to a halt. The volunteers who weren't currently on duty were dismissed, and the remaining students did a wearing instead (another way to turn, were you steer the ship along with the wind rather than against it). We felt a little downbeat after not being able to complete the tacking, but there was nothing we could do.

We’ll just have to do it on our next trip instead!

My night shift went on as usual. We played a bit, cleaned the ship and ate some bread. Now, there’s only two days until we arrive at home, and five days until we dock in the harbor.

Today was fun, a little different than the usual days at sea. An uneventful, yet eventful day.