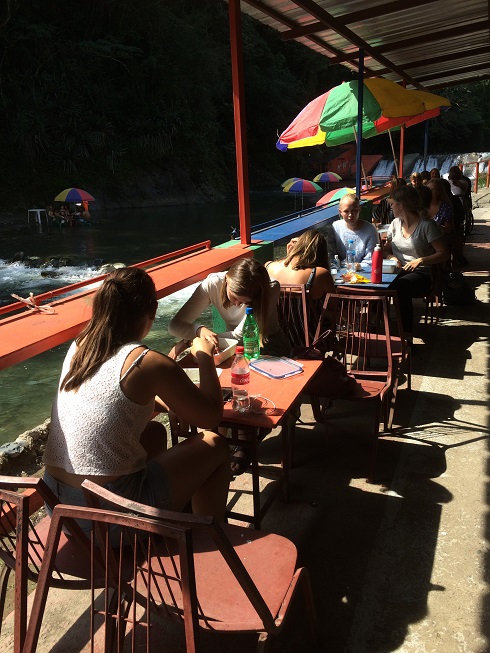 Today I did not wake up at the same time as usual, today we all woke up at 6 am to go on a bus tour. I packed the day before so when I woke up I literally just went straight to the bus because I had slept out for as long as I could.

When I first got on the bus it was freezing, which gave me hope because in other taxis I had been going on, the ac did not work at all. I sat down on a seat next to my friend Linn and soon after the bus started to go the ac died and it became crazy hot like I was expecting. It was about 3 hours to the museum we were going to. For those hours I mostly slept but we did make a stop on the way at a bakery. Me and Linn went in to hopefully find something to eat. We saw a glazed white little cake that had a cherry on the top almost wherever we looked so we thought it was a special for the bakery. It also looked very good so we bought it. After that we went outside to the bus, we sat down outside the bus before going again and me and Linn tasted the cake. It was very good and had a taste of buttercream and caramel. After the bakery we had about 1 hour to the museum and for that time I just slept like everyone else.

I had excepted a big museum but when we got there it was just a smaller house. It was a museum about three sisters that had been active in a movement against a dictator that had power around 1930 to 1961. We got our tickets and then we went on a tour around the house where they apparently had lived before. We learned about how they lived and a bit about their history, the tour was in Spanish, so our bus tour guide had to translate it to English for us. I liked the tour and I learned some things that I can use in my assignments. After the tour, our bus went to a river with a small waterfall. Here, we were supposed to eat, which we did. It was very beautiful and you could eat in the water if you wanted to but it costed. When I was done eating I went into the water to swim like almost everyone else. The water was freezing but refreshing. The river stop was probably the best moment of the day.

Now it was time to go back home, during the bus ride I once again slept. We got back around 6 pm and that’s when dinner is served on the boat. So I ate and then changed to be ready for the city. The rest of the night, me and some friends, walked around in tourist shops and for a while we sat down at an internet café. When we later got back on the boat, me and Linn watched Mamma Mia for a while before both of us fell asleep.