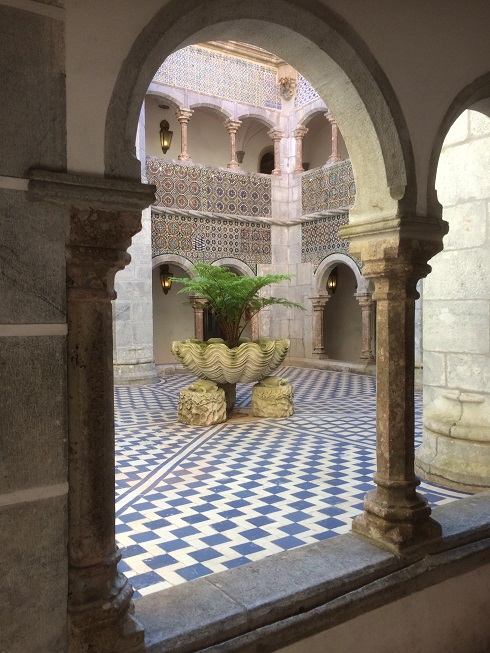 Today was lovely! We spent most of the day out on a field trip outside of the town where our boat is anchored, which is also where most people have been on their free time. For the field trip we took a bus out of the city and into a little village in the mountains.

It was really gorgeous. Even the sleepy villages in Lissabon are covered in colours and mosaics, something that kind of reminds me of the Carribean where we traveled last year. I wish we would import this to Sweden, it feels like it would liven up the streets through the grey that we're often stuck with after summer. Our first visit was to a building that really captured this aspect of Lissabon, a multicoloured castle built in the 1700s. It stuck out like a red cherry on top of the mountain. When we got closer another side of the castle was revealed which was bright yellow. It kind of looked like it would fit into a Disney themepark. Apparently romanticism was very current when the castle was being rebuilt by the royal family (at first it was used as a monestary by monks), and they wanted it to look as exotic and foreign as possible, so they brought in a lot of elements from arabic countries such as the tiles, plants and architecture used. Visiting it really extinguished that picture you sometimes have of the past where you think everything is in black and white.

The castle was surrounded by a huge ”garden”, more like a forest, which we sadly didn't have time to explore properly. Instead we visited a fort which was snaked over the neighbouring mountain. It was pretty cool. I could totally imagine a flock of horses and knights riding over the hills headed to the fort. After that we got to split up and explore the village we were in, which was a lot bigger than it first looked, leading to some pretty stressful devouring of ice cream whilst trying to locate the bus. We had a quick stop at the beach on the way back to the city, it was really nice, I'd forgotten how much I love to swim. Soon we were back home and ready to enjoy our last day in harbour.

I've absolutely loved Lissabon. It is a wonderful city with wonderful people and wonderful ice cream. I will most definitely visit again.