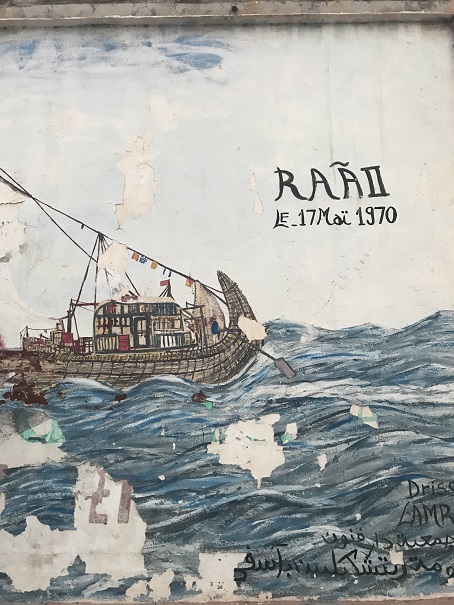 This day, the first of December 2017, started like any other day on Gunilla. I got woken up at 06:55 am for breakfast, and i was kind of tired because i had been anchor guard the whole night because we had anchored during the day before. At 07:45 am the whole starboard group had a mission to pull up the anchor and drive into the harbor of Safi!

One of my jobs in this mission was to coil up the anchors chain in the small storage room in the front of the ship. The anchors chain is very heavy so I was really tired in my arms afterwards. Another of my jobs was to throw the rope’s end on to the harbor so that we could connect the stern hawsers to the metal poles so the ship would float away from the harbor. Everything went smoothly and we were done in about an hour or so.

Around 10:00 am there were an all meeting. We got to know that we couldn’t go into town until we had gotten a special pass to enter and leave the harbor. We also got to know that you had to at least be 6 people in one group and at least one boy in every group if you wanted to leave the ship. We didn’t get the passes until 03:00 am so we only had 3 hours free time in town because we had to be back at 06:00 am. Almost directly when we left Gunilla the workers at the harbor asked us for the special passes to let us pass thru a giant gate that was chained up. When we had passed thru the gate we came to a fishing boat harbor. That harbor was completely packet with fishing boats, at least 50 even though the harbor wasn’t that big. The fishing boats were almost parked on top of each other.

In town, a lot of people immediately recognised us as swedes from Gunilla. A Lot of the younger people in Safi had no respect for the girls in my group. A lot of them shouted at us and asked the girls if they loved them and other weird stuff. I just can’t imagine how the girls felt when i who wasn’t marked felt cornered. One fun thing though was that we got some 9 or 10 year olds to lead us all the way to a supermarket where we could buy some fruits and soda. When we came back we had “Falukorv och mos” for dinner wich made me really happy.