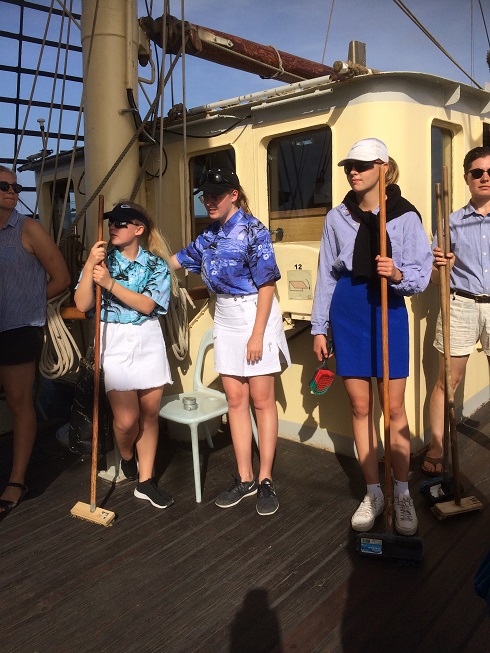 The second last day of the year was eventful - it was preperations for the coming new year´s Eve and opening of the tour of deckgolf.

The day started with a nice breakfast when the sun rised, a new phenomenon we´ve gotten to be used to, now when we have changed watch. Its´s very nice to get a whole watch with sunshine, unlike before when both of our watches was half in dark. But this sunday I was galleyduty, so I didn´t get so much sun.

In the galley it was much to do - we had two extra galleyduties to help us with the three-course dinner we were going to have the next day, parallel with the breakfast and the lunch. In addition we were going to appoint amidship´s best deckgolf-player, who would play in the final in the monday. Deckgolf implies to shoot a snuffosa into a taped square on deck with three different brushes. It´s not too easy, in parrticulary not when the ground wings!

I was the first one to try and hitted on pretty few hits. It turned out to be very few hits and when the day was over I was still the one with fewest hits of all on the boat. It was very surprising because I have never played golf earlier, but fun!

After much sparetime, because it was sunday, me and Lina had a very calm watch in the galley. Because the firstchef was sick the secondchef tooked the opportunity to let us make chocolate balls for the night snack, wich many of us had hoped for and looked forward to. We made a plenty, though not that good, and finished the cleaning early enough to go out and listen to half of a atlantic-talk.

After that i could finally go to bed and read a little bit of Selma Lagerlöf´s book Kejsarn av Portugallien.

Sweaty hugs from the Atlantic!