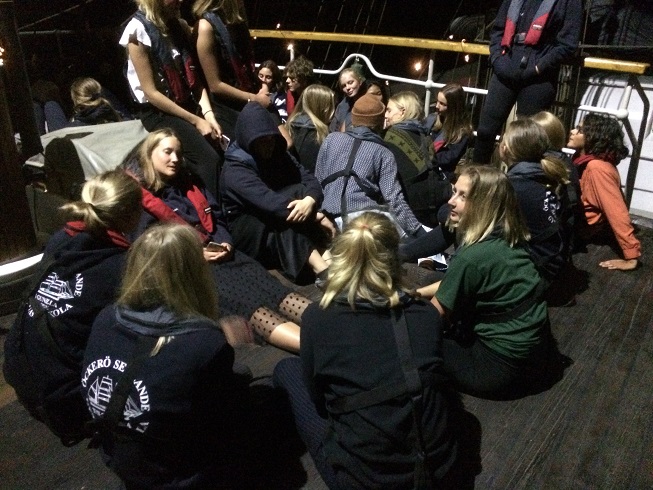 Today has been a typical day on board on Gunilla. We were awakened at half past eleven pm and started our watch half an hour later. We started with a check round to be sure that every tamp was in place. After that, our watch leader Anja told us to get rid of all the squeaking on the boat.

In order to do that we had to range all tamps (except jiggs and buntlines). It went a lot faster than the first time we did it and our tecnique is a lot better.

The wind was pretty good and we did nearly seven knots and becaus of that the wind was turned a few degrees at the lowest sails. We had to brase one line on the fock and then make a soft transition to the rest of the sails.

We fixed the sails and then it was time for som nightfood. Today we where served quesadillas. I ate like seven of them and and then we had to get back to our watch. We took the new squeaking away and then we gatherd in the back to have some sailing theory.

Anja taught us some sailing terms and how to brase one line without her help. I really like Anja because although she is tough, I always learn someting new and that makes the watch go so fast.

Every night we have something called ”Atlantic talk”, which is one hour of someone telling the rest of the watch about their life and thoughts. Tonight, without saing to much I can say that it contained everything from crazy neighbors to European championships.

On our second watch I was lookout, helmsman and lifebuoy watch. There was nothing exciting to report or watch over so I mostly drank water and watched while the others hade water war. And when Sophie threw water all over my back I wasn´t able to stop myself from participating anymore. She got two glasses over her and then we had to go back to work… lucky me.

We are now nearly halfway throug this leg and it really shows. Besides that everyone is kind of tired or hungry all the time we have started to run out of candy. The bidding has begun and everyone wants the Swedish licorice. I hope I have enough to survive the rest of the Atlantic.