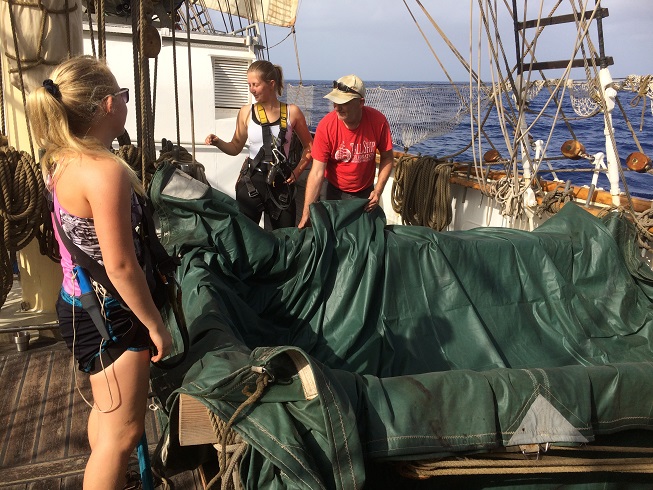 Today started at eleven thirty am. The whole watch was unusually late for the shift change. I don’t know the reason why. The first thing we all noticed the moment we opened the door was the heat. It was really hot this specific night and that didn’t make the work any easier.

On top of all of that was the night food who actually did disappoint this night. But I once read in a really old book about sailing expeditions, that “you should never complain about the food at sea and especially not the chef, cause without him you would starve to death”. This may not be the case onboard our ship, but the point stands the same.

At two o’clock am. I changed with the person at lookout. At the lookout, I usually get really tired and bored. To make the time past faster, I like to sing some of my favourite songs. This night it was “Losing my mind” who could be heard if you were standing at the foredeck. And that phrase would turn out to be very accurate as I suddenly, out of nowhere saw a bird fly straight out of the ocean. I got really surprised. It circulated for a few seconds in front of me and then dove right back into the ocean again. This was what occupied my brain for the rest of the watch. Was it a bird? Maybe a fly-fish? But could it really be a fly-fish? In that case it must’ve been a well-trained one.

After fifteen minutes at the watch, we all gathered at the poopdeck. There we had a lesson I how to tie specific knots and their purpose. After learning some of them, we made an obstacle course out of two ropes and many seizings. Every seizing was tied with a specific knot and our task was to untie it and then tie it again with the same knot. Our goal was to make the whole starboard watch complete it in under ten minutes. That wasn’t anything we achieved this night. But it was a whole lot of fun and very educating. After that, we all sat down and translated some marine phrases from Swedish to English.

At four o’clock am. it was time for us to sleep, though some of us chose not to. I myself went to bed exhausted. It had been a very eventful day and I was still thinking about the thing I saw out on the foredeck. But the more I was thinking about it, the more unsure I got. Could it just had been a hallucination? I wouldn’t have been the first one.

After just four hours of sleep, I woke up to the squeaky sound of the crane. What were they doing out there? It turned out they were building a pool. It wasn’t a treat for the eye, but it worked better then well. It was made of a tarpaulin, some ropes and some wood. The heat this day offered made the pool extra comforting and everyone wanted to try it. It was a good ending of our watch and all I wanted to do was to eat the delicious food the galley served.