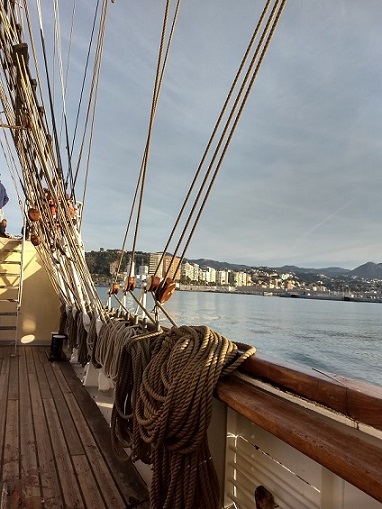 Ice cream makes you run for your life.

From a nice bath and ice cream to a running competition against the clock. When we came back inside the fence we had to keep running and the dogs started to following us till the guards told them to stop.

First I, Elsa M, Elin, Zelda, Julia, Elsa G, Livia, and Agnes went to Cabin 5 to have a little Christmas chill. We had a christmas tree and under the tree there was some gifts that we got from our families and friends. We all sat on the floor and had some candles shining. At nine they woke us up and after that we had some Christmas breakfast and we listened to Christmas music. We tried to make some Christmas feeling in the big mess room. The thing about Christmas feeling is hard because the Christmas is so different here in Cape Verde compared with home in Sweden, specially in mind of the climate. But I feel like we succeeded with making a Christmas feeling on the boat because we ate Christmas food, listen to Christmas music and looked at Kalle´s Christmas. And Santa came and gave all of us one Christmas gift. The feeling under Christmas was good, almost everyone were happy but some people was a little bit sad because its not so easy to be away from our families at Christmas. I think almost everyone called their parents and friends. A thought came running trough my mind that my family and other relatives was home at my house and had a common Christmas. And it would be very nice and cozy to come home one day or two, but for now I cant come up with anything that could make me want to leave this trip today.

Around 3 a clock all the watches played one short imitation of two of the short movies from Kalles Christmas. We had very fun and many of us students gave all in and after that we went back to the big mess room. Its now time for Santa to come and visit us and he gave us Christmas gifts. Some of the watches played the Christmas gift game before the big Christmas buffé. The food was so good and many of us ended up with a food coma.

After the food, 30 of us students had off-watch, me and five of my friends walked down to the beach and took a batch in the sea. The water was warm, I thinks it was around 20 degrees. Then we went to the city for a ice cream and then it was time to hurry back before ten a clock so we needed to run the last way so we would not get to late. When we was back at the boat again we went to bed and had a good night sleep.