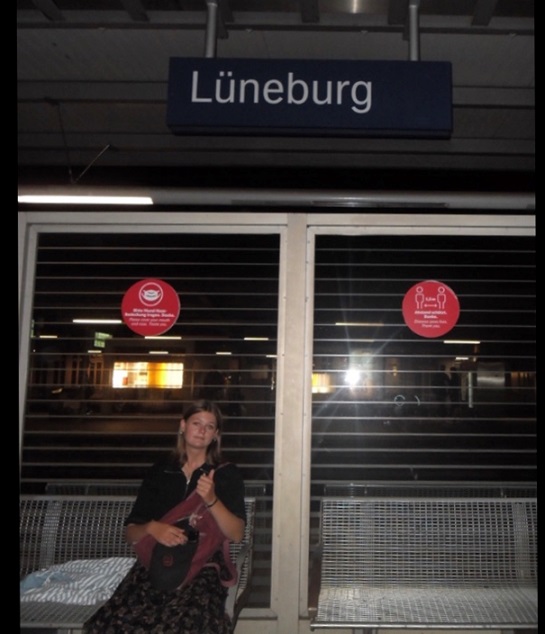 Meanwhile the sun started to warm up the small town after a cold night we got served hot cappuccino and fresh croissants in an incredibly beautiful courtyard. After breakfast we walked to one of the many churches in Lübeck. The priest in the church told us and the rest of the free watch about the ship Pamir. It sank 1958 and only 6 people survived…

The church had one of the lifeboats and, made sure to spread the story in honour of the people on board of Pamir. We laid a beautiful bouquet and had a quit minute before leaving the church.

Me and some friends took the train to Hamburg where we manage to find the coolest place ever. It was filled with graffiti, street food, and restless souls. We thrifted and admired the town for hours until our legs hurt and stomachs where empty.

On our way to a Chinese place we stumbled on a place with filled backed potatoes and fell directly. Here is when we did our first mistake. We had totally forgot about the “at least three people outside Lübeck” rule, so me and one friend went alone by the train to the main streets in Hamburg. We did some sightseeing and ate churros. Our next step now was to jump on a train back home to Lübeck (the same train as our friends).

Here comes the next problem. My friends’ phone was dead and mine hade only 20 % and with no power banks we did not want to waste the last battery and meaningless things, like google translate. So, at the train station we had a bit of a struggle to find the right train but after a while we manage to. When the conductor came, we gladly gave her our tickets but her look at them made us realise quick that something was not right. We were not on the train to Lübeck but to Lüneburg…

She helped us pick a train back but when we finally came to Lüneburg that train had already passed by. We had to wait for the next one for 1,5 hours. With now only 10 % on the phone we tried to contact KiKi, with no success. We were now longer not only two, but we knew we would not make it home to 22.00.

The temperature had dropped a lot and where now freezing. I took my friends extra skirt over the one I already had on and she took my towel over her arms. There we sat, in Lüneburg, so close we could keep us warm and just busted out in laugh. We could not stop; the situation was too absurd.

Finally, the train came and this time it took us to Lübeck, KiKi who we finally manage to get in touch with agreed to meet us on the station and walk with us home. It was such a relief. And she was not angry as we had feared, she was simply happy we were okay.

So, the summery and lesson of the day, always have a charger, do not walk away from the group and always check the train one extra time before jumping on.