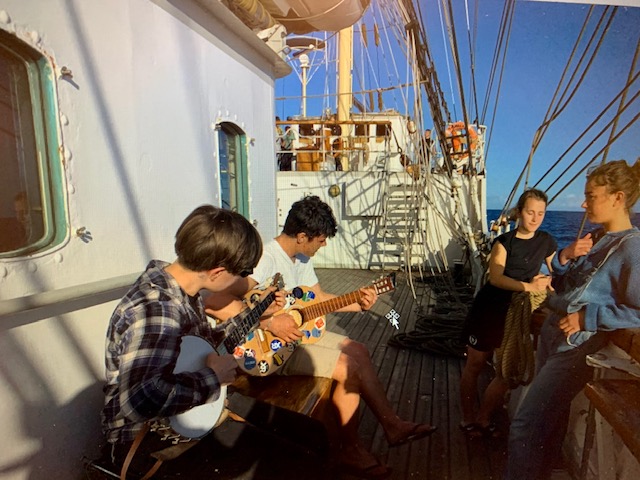 Stars, seasickness and a little bit of banjo…

Lets go to El Hierro! We are the first class in the school's history that are able to go to El Hierro. Unfortunately no Azores for us but it will still be very interesting to see what El Hierro has to offer. A departure date filled with work, some studies, a lot of seasickness and that ended whit the most incredible sky filled with billion of stars

The day started as usual with a lineup. Today, it was time for changing watch time so I went from working between 8-12 to to working between 12-4. On one hand I like that I finally have got rid of the cleaning watch but at the same time it's gonna be hard to totally destroy the normal sleeping routine. After the lineup I went to my bed again and tried to get some sleep befor my watch. Even if the motor sounded like someone was hammering on metall when we left to harbor, I finally managed to sleep about two hours until someone woke me up around 11.00. Then it was time for breakfast/lunch before the second lineup for the day. With a new watch leader, when you want to give a god first impression, of course my watch managed to be late so therefore we were punished with five minutes longer watch on the night, but what to do. We worked for a while but since we haven’t had so many lessons since we left Sweden, Anne-Li decided to have a lesson around 14.00. After that, we had the grand meeting that we have every Sunday where we talk about if we want to change something or if the crew want to talk about something special etc.

After the watch me and some friends decided to go out and sit in the sund listen to music. On the deck Eli, one of our commanders played banjo while Emil played guitar and the rest of us sang and it was very cozy. I am so grateful that I haven’t felt any seasickness at all because I have really been able to enjoy every second onboard. After a while we ate dinner before I went to bed again.

When I woke up, it was time for work again. By then, it had started to be really windy and many people were extremely seasick. When I came up on the deck I saw the most beautiful sky I have ever seen in my entire life filled whit billions of stars. We took up different sails the entire watch and it was very fun, but now my hands are completely sore. At 04.00 the watch was finally over and we were able to go to bed and get a good night sleep.