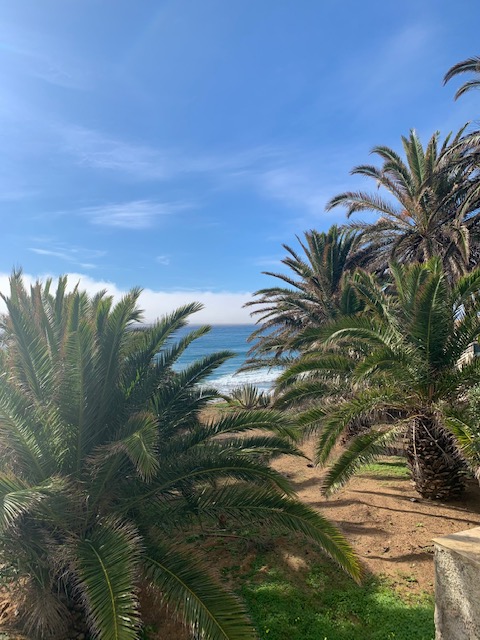 The weather had gotten really good already by morning assembly at eight o’clock. During the assembly, Anne-Li told us that the weather was going to be lovely the whole day.

That made me and my watch very excited since we had booked a surfing lession later that day. After the assembly, I headed downstairs to get some more sleep. It was nice considering that you seldom get enough sleep during night on this boat. If you don’t have work, there are always people to talk to.

Maja and Olivia woke me up at ten. They told me they were going to visit a fruit market in Funchal, not too far from the boat. I got ready and we headed out. Sara, Klara and Alice joined us. We went to the market and then found a nice place to eat lunch. On our way back we ate gelato ice cream. It was really good since it was getting kind of sweaty.

At two o’clock we got picked up by the surfing instructors. They had one van and two cars so the group split up. During the 40-minute ride we managed to have a really interesting conversation with the instructor. We talked about corona and restrictions, the Portuguese school system and a bit about Sweden.

The beach was located in Seixal, a town in north west Madeira. We were all very stunned when we saw the beach where we were going to surf. The view was amazing and you could see the green mountains and the valley where the sun hit. The sand itself was black, since Madeira is a volcano island. That was really cool.

The surfing went extremely well, most of us managed to stand up on the board and the waves were perfect for us since we are beginners. The instructors taught us many useful things. When they told us there were only a few minutes left and everyone were going to catch a last wave we got really sad since none of us wanted to stop.

Madeira has a curfew at seven o’clock, therefore the instructors dove us back so that we were on the boat a

while before seven. We ate dinner and during the evening I spent some time with some of my friends.