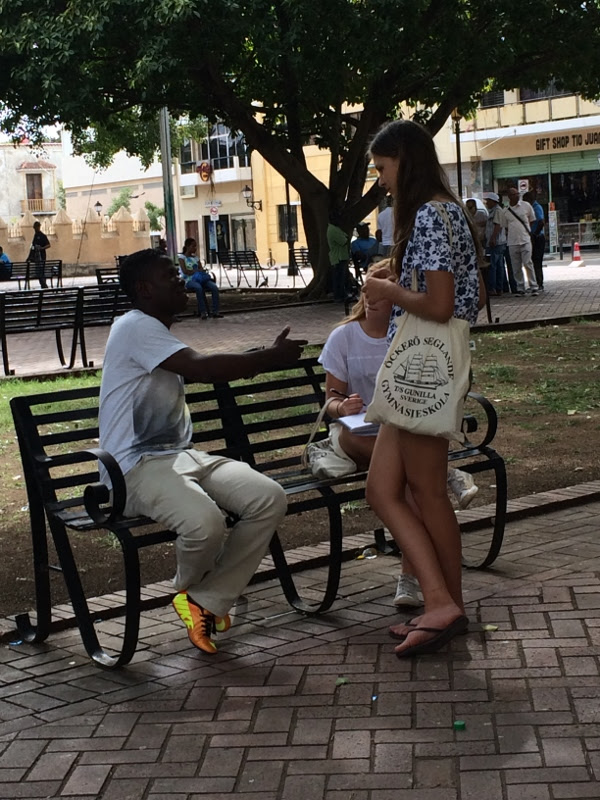 The end is approaching

As we’re getting closer to the end of this amazing voyage we all finally starts to realize what an incredible experience this is.

Perhaps some of us really want to go home because of everyone they’re missing back home, but I think I’m speaking for the majority when I’m saying that we would want to stay here for a little while longer. Even though we don’t get that much sleep, or the food isn’t always your favorite, this boat filled with these people makes it all something special.

This was the fourth day on the Dominican Republic. For those who were lucky, the ones who didn’t have watch (including me), the day was a completely free day full of time to spend on something fun. Some of the lucky ones took a cab to the beach called “Boca Chica”, which we heard was supposed to be amazing. A few of them also went snorkeling, I bet it was amazing. Some of us wanted to go to IKEA to buy some Swedish candy or other stuff, I bet they’re really missing home. The ones I went out with started our day throughout walking slowly through the beautiful town Santo Domingo. On the way to china town we stopped at a fruit market and bought some mango, pineapple and other exotic fruits. The market (the second one we stopped at) was kind of in the slum area of the city, which perhaps isn’t the best part to spend your time in as a young woman tourist. Even though it was a bit scary it all went great, of course the men whistled after us but that’s just a part of their culture and you just have to ignore it and keep moving forward.

After our visit at the fruit market we finally came to China Town. Surprisingly it was really small, one and a half block, so there wasn’t really much to explore there. Of course, we went in to some Chinese shops, they still talked Spanish in there, so I took advantage of the situation and talked some Spanish with some of them in the shops. In the first shop one man greeted us and talked to my friends, I quickly joined the conversation and succeeded to explain to the old man that we were students from Sweden living on a boat (in Spanish). Even though my grammar wasn’t the best his friend understood what I meant and could explain to him. In the second shop, I also got the opportunity to talk some Spanish. This shop we visited just a few days ago and the man remembered me and started to talk with us. Then he asked very politely why I didn’t talk so much this time, so I answered in Spanish “Estoy cansado” (I’m tired). He got really impressed (which is kind of weird because it doesn’t take that much lessons to learn that little Spanish that I know). (I hope my Spanish teacher is very proud of me now, at least I tried ;)).

I hope you didn’t get too bored by reading this blog, and perhaps you now know some more about what we’re really doing here at the Dominican Republic.