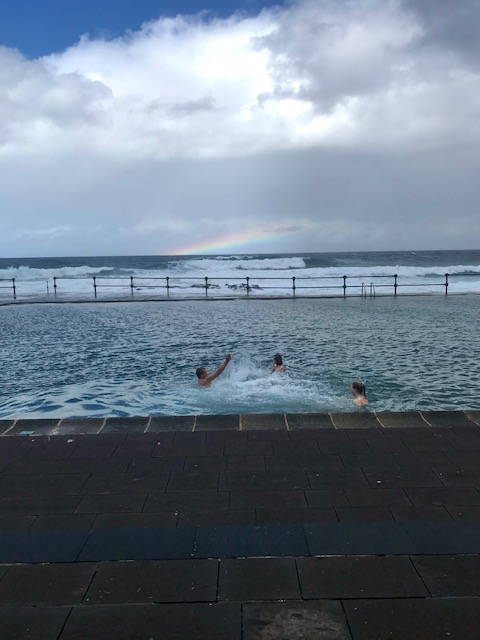 The first bath for me on Tenerife

Days don´t always go as planned but you should always continue to be happy and make the best of the situation.

When I woke up I was very tired so I thought staying at Gunilla all day to relax and sleep would be a good idea, but then I heard that someothers were going to surf. I have never surfed but I have always wanted to do it so I joined them. We went to the busstation after the breakfast and waited there for 20 minutes before boarding the bus to the northwest of Tenerife. We arrived at Tacoronte after 40 minutes and went to a surfingschool in a normal dwellinghouse. First we knocked on the wrong house and a women opened the door and said in spanish that the surfingshcool were at the house next door. We went to the right house and a man opened the door and asked us if we were there for the surfing and we answered yes. Then he looked at the sea and started explaining to us that the weather is to windy to surf so he does not rent out surfboards today. Of course we were disapointed but we continued to be in a good mood and went to a café. The lady who worked at the cafe did not understand a single English word, so we did our best to order in Spanish. I ordered a baconsandwich and a coffee, it was delicious. After about an hour we went to a saltwater pool that was nearby. It was quite cold in the air but it was about 20 degrees in the water so it was nice. The pool was right next to the sea and the waves were big, it was understandable that it was not possible to surf. It was very fun to swim and we were in the water for a long time. Before we finally went back to Gunilla we went to a supermarket and bought fruits and ice cream.