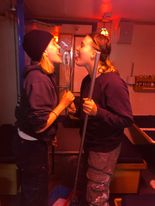 There is a saying in Swedish: “A dear child has many names” and it´s the same with my watch starboard because our watch is called ”människovakten”, ”slidbord” and ”toppjenterna”. Actually. To get to know us a little better I thought I would describe us as a watch and what we do on the days out at sea.

The starboard watch is now working from 8-12 and therefore led by captain Torben and the watch leader Bea. In our watch we are 14 girls who sleep in four different cabins. In cabin 5 Elin, Ellen, Ella, and Ester live. We called this cabin the E-cabin because all of their names begin with the letter E. In the next cabin, cabin 7, I live together with Felicia, Agnes, and Tove. Our cabin is the largest of the starboard cabins, which results in many visits from other people. But I appreciate it. In the cabin next to us Ebba, Wilma, Tova and Alva live, cabin 9. From their cabin, a good mix of music is heard in the student corridor.

If you would not hear the music, you know that this cabin is asleep. Good to know! In the last cabin, which is cabin 11, Frida and Elsa live. The cabin is placed on the other side of the big mess room, which means that the cabin, together with cabin 12, is apart from the other cabins.

The starboard watch is very synchronized, which makes it easy for everyone to be in the same mood. In the morning watch Agnes felt like performing competitions so during the watch we conducted competitions such a knot challenge and set the inner jib. Of course, Agnes won the challenge, even over Bea. In the afternoon watch Elsa was in a very mischievous mood which affected the rest of us. Me, Elsa, Agnes, Ebba, and Ellen got the assignment to scrub all Gunilla´s decks with a special soda and acetic acid. If the two substances are mixed, a chemical explosion can be formed. We took it on average seriousness since we were in a flame mood. Felicia became our doorman and warned people from the other watches and told them what we did on deck. After the whole watch, that is four hours later, we had scrubbed scrub all the decks, and we were proud of good teamwork. But after the watch we heard that our work was badly done so the next watch got to do the same thing again. However, it´s usually like this:)