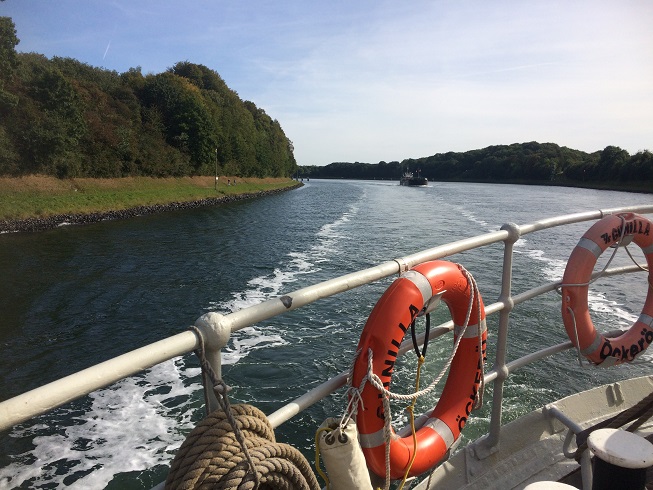 Welcome to the Kiel Canal

”The pilot comes on board tomorrow at 06 o’clock, then we will be locked in the Kiel canal!”, was said when we went off the watch att 00 o’clock the night before. When it was time for the watch again at 08 o’clock we saw no pilot, and we were still outside the canal.

The fog was too thick in the morning so we couldn’t go into the canal yet. We had anchored up and were waiting for the fog to disappear. Around 09 o’clock did the pilot came on board and we started pulling up the anchor. Finally could we head for the canal! Then the next problem came…

An oil leak had occurred in the canal and we received orders to anchor again. We trained at different knots while we waited and at 10 o’clock we could finally pull the anchor again and steer toward the canal. I feel bad for the midships-watch who has their rooms next to the anchor wire. They can’t have gotten much sleep.

When we reached the lock, we come alongside the quay and the water level started to rise. I thought we were going to be able to get up several meters so I was a little bit disappointed when it was just half a meter. But going trough a lock is an experience itself so it was fun anyway! The canal was then lined with trees, cornfields and the smell of manure. Finally were we on our way thru the Kiel canal!