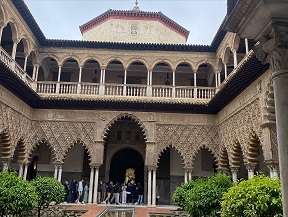 We went to a big city today. We got to see a palace.

Really it was like a collection of castles. I didn't catch all of what our tour guide was telling us about it through our very proffessional earpieces. And it was a lot. A lot of historyof the entire region was reflected in the palace.

It shifted as we walked through it. Tiny intricate patterns which the maker must have found either meditative or insanity inducing to carve came from Muslim designers. When the rule of the castle changed to Christian again we got to see the moorish designs with more long curves and squuare tiles, it reminded me a bit of the tourquoise and shelled out ”beachy/nautical inspired” decor people had a lot of in the 2000s, but maybe a bit more royal. Those two were both stunning but my favourite was when they did the cartoonish, kind of grotesque medieval looking people and animals. Lots of nipples and teeth.

You also had almagamations of previous design styles showing up. Inscriptions in arabic saying long live Allah plus their at the time Christian king, with a star of David underneath. I found it pretty beautiful.

Just like most of our class during the tour, you might be getting a bit bored of this long retelling of it. I found it enchanting and interesting all the way through but I'll take you out into the swelling sun anyway.

There I had a close encounter with a peacock. I gave him some roasted beans and half of my sandwich. I should have split it up into smaller pieaces though because he got really freaked out by the sandwich. Reminded me of our chickens.

After that I hooked up with some people who wanted to go secondhand hopping. We made it out of the castle gardens (which were filled with very skinny, very tall palm trees and hedges that looked like Marge Simpsons hair) and got into what I think is the old part of the city. It felt a bit like Gothenburg mixed with what I believe Italy is like. Faded brick walls, climbing flowers, balconies a hands length from touching.

A colour which showed up everywhere as detailing on buildings was this dusty mustard yellow colour. I realized why when the sun hit it, it just lit up and looking at it felt like drinking a glass of orange juice. I don't think I'm wrong in saying that Sevilla is built around the sun. The whole city is pretty much at the same level, except for the castles and other opulent buildings sticking up here and there, all houses being made up of two stories. According to our tour guide this is for the coming and going warmth. In average temperatures you can enjoy your whole house and when the blaze comes you escape into the colder second story of it.

I had a good time checking out secondhands. They were very 80s leaning, I wonder why? I've noticed a pattern of this in places where a large older population lives.

When you walk around checking out stores though, what you're really doing is checking out the city. And I did feel seeduced and disarmed by Sevilla. I would love to go back and look at more of their nature and big rich things. And learn more about their history, This area of southern Spain, Gibraltar and Morocco seems to have such an interesting one from the little I know.

The bus ride home was lovely. I just looked at the sunset and listened to people talk. Then when we were back at the boat it was, as we say in Sweden, ”pums i sängs”. Which is what I am going to do now too, as I am writing this at 1:09 at night. Good night.