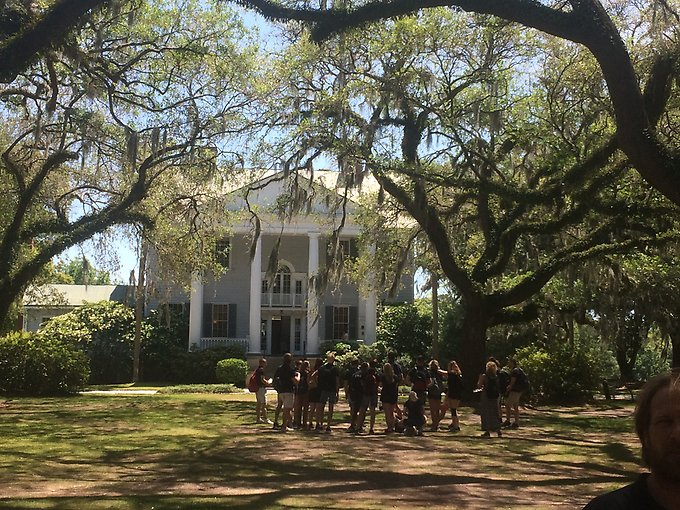 Day three in Charleston and the ground under our feet finally feels still after a few stormy days at sea. Just like Miami the sky is blue and the sun is shining over the beautiful town of Charleston. Walking around town you can tell from the buildings it has been here for a while and has a lot of history. Today’s field trip was all about getting to know and understand their history better.

We started our day of by walking to the Slave Mart museum, a small building that used to be a place where the slaves were sold. Charleston used to be a town in the center of slavery, thousands of slaves were shipped here, sold and bought. We listened to a women trying to tell their story to us, a short version of everything horrible that happened to get us to understand what happened, to never repeat it again.

We continued our trip towards one of the plantages where the slaves used to work. We walked in the sun, ate our lunch in a park and took the bus towards our destination. We came there and were met by a beautiful oak ally, the branches forming a tunnel over our heads as a passage towards a huge blue house with a stunning front porch. Everything felt really peaceful, kind of a weird feeling to get when you know how hundreds of slaves were tortured there. A man walked us around, showed us the small, unfurnished houses where the slaves lived. He talked about the concept of race, how it´s something that we humans made up, something that someone thought of and how big of an impact it has had on people’s lives, and how much it still affects us. Surrounded by the beautiful trees flowers and the blue house it all felt far away, but still the thought of what happened there, and the feeling of something being wrong was hard to shake.

We left the plantagen and got a bus towards the ship again, the sun still warming us while walking the last bit home.

Hope you are having a great time in Sweden to!