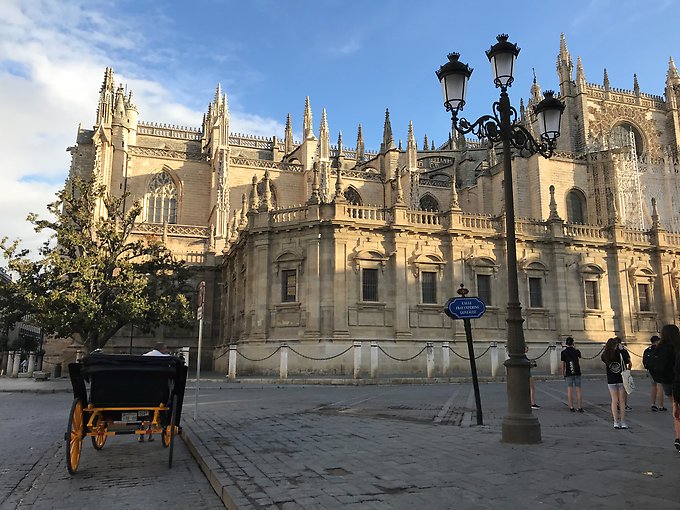 A day in Sevilla

Today we spent the day in Sevilla which ment that we had our first trip outside of Cádiz since arriving here on Wednesday. During the day we had guided tours, did interviews and strolled around in the city

Since the bus left Cádiz at 8 am we all woke up earlier than normal today, at approximately 6 o´clock in the morning. After an early breakfast we gathered up and walked together to the bus stop where we were picked up. The bus ride took around 1,5 hours and when we arrived we first had a couple of hours to use however we wanted - to just stroll around and explore the city or get some schoolwork done. Me and some others tried to do Spanish interviews but soon we realized that it was pretty hard since most locals weren’t out on the streets in the middle of the day. Therefore my group only managed to get one interview done in those hours but when we walked around trying to get interviews we saw a lot of the beautiful city instead.

At 12 o’clock the whole group got together again and we went to a guided tour in Alcazar and the cathedral in Sevilla. The guide told us about the history of these two and showed us around the buildings. They were very beautiful and magnificent but it was still very nice to get out in the city again after the tour because it was so long and the weather outside very nice. Me and some other pupils then went to a really cozy restaurant and ordered some food. There we had a really good time and after the restaurant the whole group got together once more and we walked to the bus and went back to Cádiz and Gunilla where we ate dinner at the ship.