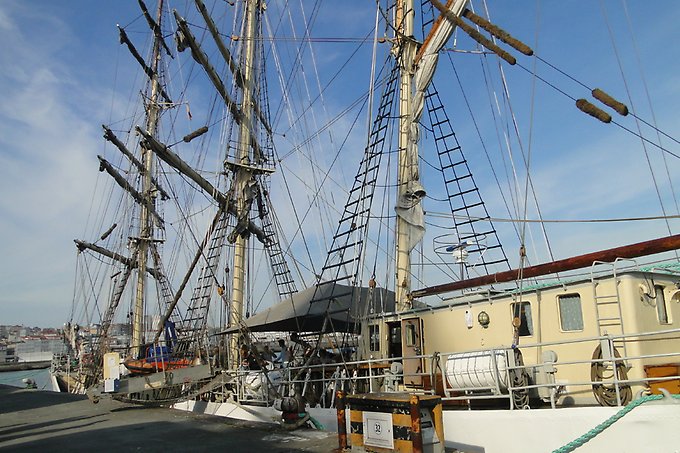 A visit to a Spanish school

After seven LONG days at sea over the wild Biscay we finally arrived yesterday in Spain (at last) and today we are floating calmly in the port of A Coruña.

The wind has been changed out by the sun and we now have small friendly waves instead of big ones throwing us around like dolls. People are getting into the showers now that you no longer have to hold yourself up against the wall in oder not to fall or pend fort and backwards to catch the water. The puking gutter is finally lonely after a lot of company on our way over here. At least my watch team were very good at keeping the gutter company, lucky for me I wasn’t one of it’s many friends.

Today the plan was to go visit a Spanish school, even if i saw many tired faces on our way there I saw nearly none on our way back home. The visit was mostly consisting of talking to the Spanish students and surprisingly enough a lot of dancing but we were also shown a information (or as I would call it, propaganda) film about Galicia. Besides the fact that my ears was destroyed from the moment I stepped inside the doors of the school, due to the sound level, we had so much fun that you would not believe it. I’m sure all of my classmates agrees that it was the best school visit this far.

Unfortunately the school visit had to end and it was time to go back to the boat where port board were on watch while the rest were free to go out in the city. After a long and precise cleaning and a dinner filled with crying laughter one of us got a text from one of the students we meet earlier during the day saying they were outside the port to meet us again. We guided them around the boat and talked to them on deck for three hours until they had to go. But before they left we got the idea of doing a sleepover just like we did in Portsmouth with the english family, since it was one of the best things we’ve done on the trip. With a yes from our DOS, their teachers and their parents it was decided and I cant even begin to describe how much I look forward to getting to know our new friends better.