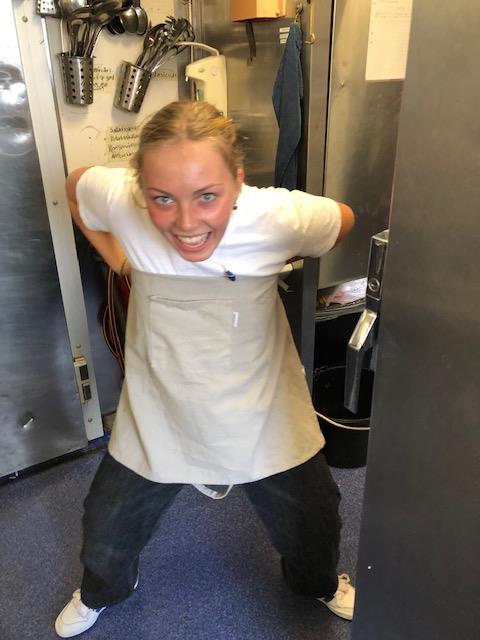 Gooood morning Vietnaaaam!
Throw your trousers on, get those suspenders clipped in because today we leave Sevilla!

My day starts like every single other day, with someone waking me up. Great news! Its pancakes for breakfast. But the thing that makes this morning different than others is that I don’t feel like a corpse someone has dragged through five villages in Slovakia, thrown in the ground and back up again. I feel pretty good. The reason for this is that the time got pushed forward one hour so we got one extra hour in bed, we are now in Spanish wintertime. Feliz Navidad, and all that.
I got my working clothes on and a couple of minutes later I found myself on deck. Apparently, were using the old timetable from Cadiz to Safi because there isn’t a new one. This means that I’m in the galley… again… with Liv… again… Now don’t get me wrong I adore Liv, she’s awesome and we are kings in the galley, but I get a little bit tired of having the same tasks every time. I very rarely get to work on deck. We complain for a while and get to work. We take a break in our work/complaining to say goodbye to the bosun and captain we’ve had the whole trip until now. Imagine two young ladies with their handkerchiefs waving adieu. But the handkerchiefs are tissue paper, and the waving adieu is screaming and flapping. Back in the galley and all goes well until I need to slice potatoes, 10 kg of them. The amount of potatoes is not the issue, the problem is that I mistake my thumb for a potato and dig the knife right into it. I’ve gotten sliced before and most times it’s not a huge issue but this time the pain made me want to raid a medicine cabinet. It was awful.

After the watch I dragged my lazy butt up to the forcastle and got ready to get nice and crisp. Some hours later it was time for fika so I gathered up my things and went back down, I reek of old man sweat but why bother taking a shower when I’m going to stand in a steamy galley in three hours? I start writing this blog, fall asleep and eat dinner all in 30 minutes.
Sometime later we get up on watch yet again but this time I’m not in the galley, I realize that I probably should have taken that shower when I had the chance. The new timetable says that I’m a part of the workforce. Exciting! The watch was like any other, but I had fun. At last, the clock chimed eight bells and it was time for bed. New day tomorrow.

The last part of my blog I would like to dedicate to my mother who I haven’t missed this much since the summer of -86 when I thought she was dead in a park, but it turned out to be a raccoon and I consequentially felt very silly for thinking my mother was a raccoon.
Hello mother.