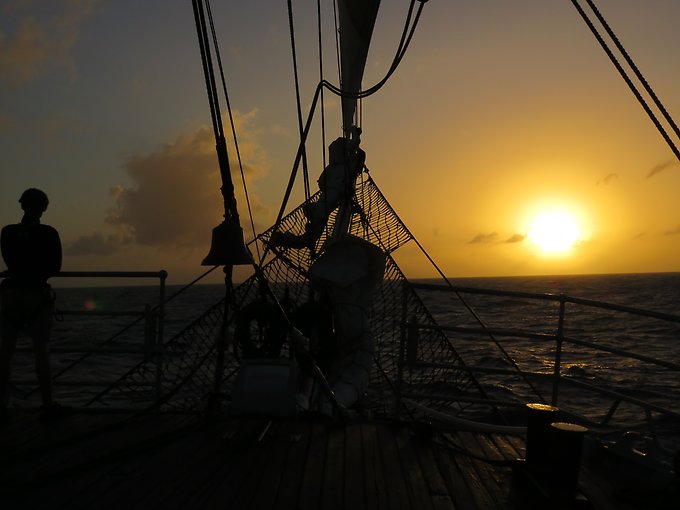 It's been a long day. Maybe not very suprising since I'm in the twelve-four watch, but still.

I think the biggest reason why the day doesn't seem to end is because we have nothing to do. Literally, nothing! Now I know what you're thinking, Jon, you're on a big fricking boat with masts and stuff, how can you not have anything to do? Well dear you, the thing is that right now we're “sailing” straight against the wind, so sails aren't very useful which means no climbing, no bracing, no trimming. We can't even grease the wires because the wind is to strong! Now I know what you're thinking once again, but Jon, isn't it really chill and relaxing to have nothing to do? Well, yes it is, but it's also sooo boring. We just sit around and talk about all the cravings we have, our favourite kids shows from when we were small and how to not get murdered in Jamaica, if we even get there. If you even get there? Yes, if we even get there! Because right now, if everything continues as usual and we keep going at our record breaking speed of two knots (!), we will reach Montego Bay in around a week. Yey...

But enough with the negativity, because after all Gunilla is, personally, still amazing. It's boiling (but manageable) hot in both the air and the water, the crew is awsome, the mood on the boat is generally really good and we finally saw the first dolphines of the trip. I also have to give a shoutout to our dear birthday “kids”, Janelle and Simon.

You want to know what one of the most annoying things about having a really dull day on board is. It's not being able to write 500 words in a blog. But since I need to write another 200 words I'm just gonna write down the summary of Nick Hornbys book “About a Boy”. Enjoy!

Will is thirty-six but acts like a teenager. Single, child-free and still feeling cool, he reads the right magazines, goes to the right clubs and knows which trainers to wear. He´s also discovered a great way to score with woman at single parents´ groups, full of available (and grateful) mothers, all waiting for Mr Nice Guy. That´s where he meets Marcus, the oldest twelve-year-old in the world. Marcus is a bit strange: he lisens to Joni Mitchell and Mozart, he looks after his Mum and he´s never even owned a pair of trainers. Perhaps if Will can teach Marcus how to be a kid, Marcus can help Will grow up and they can both start to act their age.