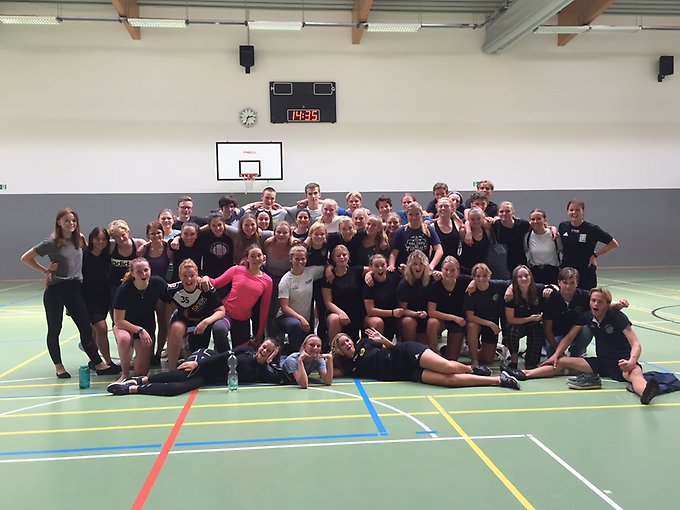 Football, school exchange and much more!

Today we had a school exchange with Thomas Mann Schule in Lübeck. We did our school assignments and played the yearly football match, which we had to win to keep the streak going. Overall, it was a great day and we had a lot of fun!

Moa woke us up at 6:45. She said some words I did not understand and told us that breakfast starts in 15 minutes. She turned on the lights in our room and then left again as fast as she came. I got up quite quickly despite being extremely tired and washed my face with some cold water, which removed my tiredness instantly. The fever I had the day before had past and I looked forwards for the school exchange.

After we all finished eating breakfast and the three kitchen helpers had cleaned everything up we meet outside the ship and started walking towards the school. It was a quite long walk and took around 45 minutes; the positive thing was that the sun was not up all the way, so it was a nice temperature for walking.

At the school, we received a warm welcome and were quickly split up in small groups where we could ask questions for our school assignments. We asked question for our big society studies/Swedish report where our topic is abortion and for our Geography assignment where we talk about how immigrants affect job opportunities. We got all the answers we needed and at 12 o clock, it was time for lunch. Pasta Bolognese was served which was tasty and we even got some chocolate mousse as desert.

After lunch, it was time for the most important activity of the day, the yearly football match. Last year Öckerö seglande gymnasieskola took home the victory and we needed to keep the winning streak going. It was hard to score goals because we played with 11 players on a quite small field but after around 20 minutes we managed to score a goal, which meant we were in the lead with 1-0. We were extremely happy and because of this, we lost a bit of concentration that lead to them scoring the next goal. We took back our focus and kept on trying to score goals but it was hard to get past all the 11 Germans. Luckily, in one of the last minutes, we managed to score another goal that made us winner of the yearly football match!

We were quite exhausted after the football match, but despite this, me and two other people decided to run home because we anyways had our sport clothes on. This lead to us being the first students back on the ship, which meant we did not have to que for the showers, which by the way were really needed!

The whole day was amazing. We made many new friends and learned loads of new things. We also won the yearly football match and had an amazing time. I hope I get to meet some of these people again because they were all really nice!