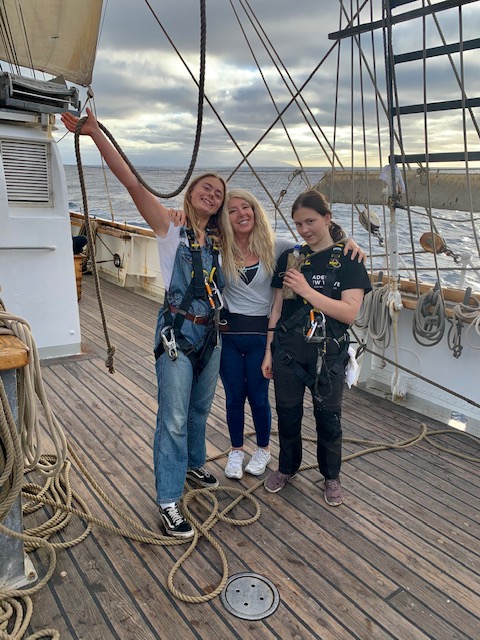 Soon our trip is over and it’s starting to show. We’re deep cleaning and counting everything in our inventory as the date of our flight home is creeping closer.

Meanwhile me and my friend were sweating in over +25°C, the seas at home had frozen over and my family and friends were freezing at almost -15°C. And there I was, on a beach in my bikini, drinking smoothies and sunbathing during a pandemic. I would never have thought that I would be spending a day in February walking around with a friend somewhere on a canary island in a skirt and T-Shirt and especially not during a world crisis. That we get to sail and visit different places right now is something I’m more than grateful for. But soon we’re going back to the cold weather and this trip will be over. I noticed a couple of days ago that I’ve been calling this place my home and maybe that’s why I haven’t
been missing my real home, family and friends as much as I thought I would. I know it sounds a bit bizarre but to be honest I’ve barely felt any homesickness at all after two months at sea. This place has become part of my home and the people on board have become a part of my family and I know that I’m going to miss this place like crazy when I’m back home.

I remember the first time we were going to climb in the rig. The emotions were quite mixed, some were terrified and some were really excited. We climbed as high as we dared and held on to the yard as hard as we possibly could. It feels like an eternity ago even though it happened just two months ago. We have done so much together in such a short period of time and it feels like I’ve known these people for my whole life. We have done almost everything together. We’ve been eating, sleeping, working, studying, fighting and crying together. We’ve puked over the railings due to seasickness (and then had to clean up each other’s messes). We have visited so many places and made so many memories together. There’s not a single thing that hasn’t been done as a . We have been through a lot during the two months that have passed and it has brought us closer to each other. There has been a bit of arguing lately since we’re getting fed up with almost everything. But even though we have been biting eachothers backs a little and everyone is getting really sick of not getting even a minute or a second alone, I think that we’ll all miss each other a lot when the trip is over and we’re facing online studies again. We just have to get through the cold and soon we will be back here again, back to our second home.