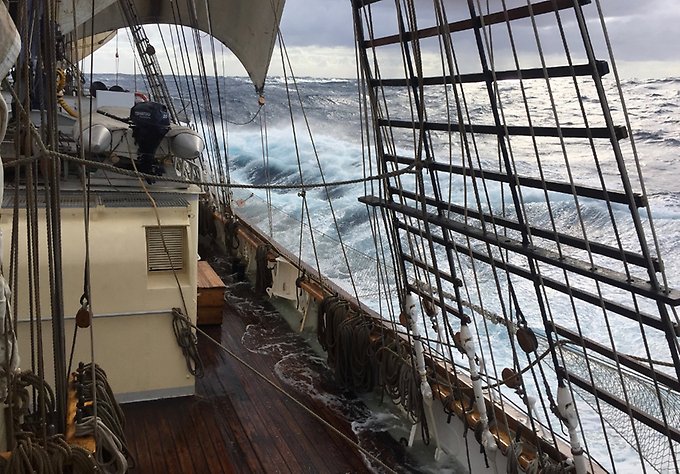 Hold on and work

Today was a special day, it was the first time this trip that we had really big waves. Our first mate Jesper told us that the waves were about 5-6 meter high.

When something like this happens on Gunilla it feels like all the productivity stops and all the time and energy left from holding on for dear life is used to adapting to the waves. Even the simplest things become a challenge in this weather, like eating breakfast for example is not the relaxing time to start the morning like it is at home. When we eat breakfast we have to be alert and keep both eyes on all the thing at the table so that nothing tips over and break.

On today’s watch me and Marcus worked in the kitchen which normally Is difficult task becomes extremely tough with these waves. When the whole kitchen moves around and every little item in the kitchen is constantly on the move it is hard to get things done. You are only able to work a few short seconds at the time before you need to hold on to something to not fall and slide over the kitchen floor. Before our watch started our head chef had slipped in the kitchen and hurt himself so a lot of the work that had to be done in the kitchen was in me and Marcus hands. One time in the middle of the watch when the weather had seemed to calmed down the head chef said “Looks like it is getting calmer out there” something that he soon regretted. Right after he said it a bigger wave than normal hit us and some plates and soup went on the floor. The head chef with a tired half smiling look on his face said “should not had said that” and laughed.

Out on deck there weren’t much going on, some people were sea sick and was sitting by the rail looking at the horizon. Most of them just sat there holding on to something to not slide across the deck. Sometimes really big waves went up on deck hitting the people there. So it was not the most productive day here at Gunilla, but I had a lot of fun in the kitchen with the chef and Marcus and we did a great job.