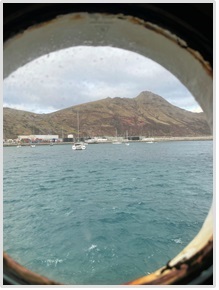 Today It´s the last day here in Porto Santo. We were supposed to stay until tomorrow, but we will have to leave earlier than planned due to bad weather and upcoming headwinds on the way to the Azores.

When I woke up this morning I felt really tired and after seeing the cloudy and windy weather outside, I chose to stay here on the boat instead of going out to explore the island with the others. Since it´s a small island with very little to do I don´t feel like I´m missing out on something by staying here. One of the few things you can do here is go to the beach, but today

wasn!t the best day for that. So, after breakfast, I took a nap for a couple of hours. I dreamt that we were having a party here on the boat which all of my friends from home came to. I don´t need to go into details but it was a pretty odd dream. I woke up just in time for the fika so I ate bread and some fruit. The bread that our chefs bake is really good I should ask for the recipe so I can make it when I get back home. After the fika I started to study, which gave me another reason to stay in today, to catch up with the schoolwork. Because of that though my day won´t be that interesting to read about, sorry for that but I´m chilling today, atleast until I have watch. For lunch, we had spaghetti bolognese and afterwards, I went back to studying. My free time was over at three o clock, and I had to go on watch. I cleaned for three hours straight until the watch was over at 6 and the dinner was served. Afterwards, I also had to guard the boat for an hour, we had to put out more fenders between the boat and the dock because of the strong winds that were pushing the boat towards the dock. I later spent the rest of my free time calling home before the departure, I was talking on the phone for as long as I could but eventually, I lost the connection when we sailed too far away from land. Now we're heading towards the last stop of this journey, the Azores. This was my day here onboard on T/S Gunilla hope that you who read this have had a great day as well.