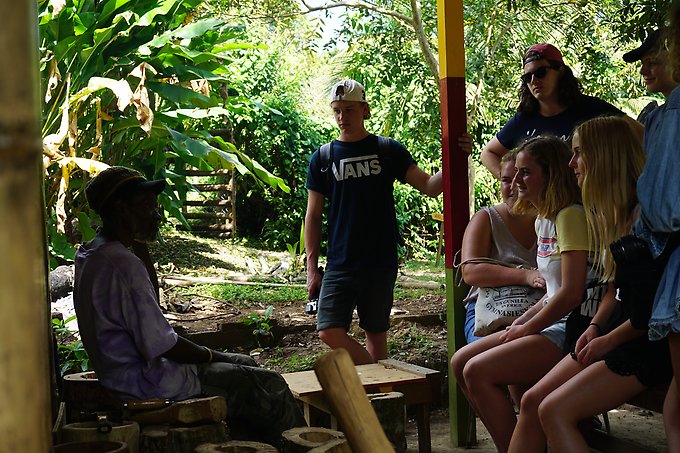 Rastafari and a creepy piano

8 AM, lineup. My bag is full with water and my skin is prepped with SPF and I’m ready for the day.

Two small buses driving us up to the mountains for a visit in the Rastafari indigenous village in Montego Bay. We were greeted by a man and a woman, who apparently was their Queen B, and she led us over a river and up to a tiny society with not more than 15 people living there.

We had a discourse about Rastafari with a man - what we knew about the culture and how it actually is. He talked, among other things, about their relation to nature, the Rastafarian colors and marijuana. I got really caught up in what he said and thought that their view and perspective about things were really thoughtful and I love the fact that they are all about love.

The Rastafarian colors are yellow, red and green – in that specific order, which confused me because everywhere I look the colors are in the wrong order. The yellow stands for the sun, the red for the blood of all living creatures and green for earth and nature. We also got to look at and smell marijuana, which our DOS seemed to find inappropriate which I totally understand since it’s illegal in Sweden, but I thought that they seem to use it for a good purpose and that it didn’t seem to hurt them.

Anyway, we also got to listen to them playing their music which was really pleasant and we also got to "fullticipate" ourselves. That’s another thing about them, they change words that have something negative about them, for example they say fullticipate instead of participate, because you want to do things fully. Me and two others got a very good connection with one of them, and we got a CD with their music and his number and mail if we were interested in coming back. This visit was, in my opinion, the best we’ve done with the school.

However, after that we went to another place, a plantation estate where slaves worked during the slavery. I thought it would be interesting and worth it, even if I was so overheated and dehydrated that I almost passed out. We arrived to Greenwood Great House, and realized that it wasn’t what I or anyone else expected. Instead of getting a tour about the slaves and what they’ve been trough, we got a magnificent tour of the house of the family who owned the slaves. So instead of leaving there with more knowledge about a such important historic event as the slavery in Jamaica, I got knowledge about an irrelevant family and their German chandeliers and piano that played itself.

I left the place annoyed because the thought about that we could be sitting on a beach instead of being their triggered me a tiny bit. But the day had a happy ending, because we had enough time to get to the beach and cool down in the ocean.