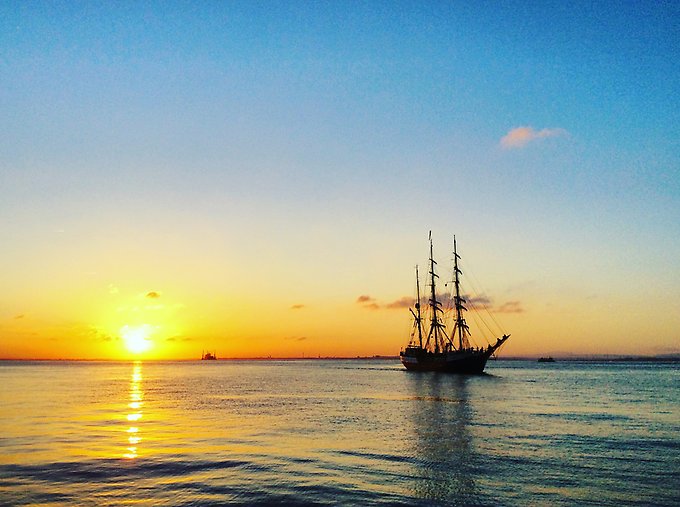 The 2 of June me and eight other from my watch rented scooters. We went on a trip around the island.

Our first stop was the grocery store where we bought some fruit and yoghourt as picnic food. The second stop we made were at some kind of park. Behind a fence there were deers I think and all around the place peacocks was running loose me and Linn even saw one of them attack some guy who I think was working there. After like a half hour at that place we took off to the next stop which were a volcano that had its last outbreak in the year 1958. At this place a big lighthouse was a huge turist thing apparently. We stayed at this place a little longer so we could take a lot of photos and videos.

A funny thing about the Azores is that the climate is very different on different places. When we saw the deers we could easily have been in Sweden, and at the volcano everything was like a black desert, as the trip went on we also passed like a rainforest. We drove up the mountain and stopped for a picnic break at a lookout spot. From here we saw the huge mountain called Pico, often this mountain is covered in clouds but this day was clear so we saw the whole thing, it was really nice. We had our picnic and then we drove off again. This time to a cauldron volcano which was really cool. One thing I still don´t get is why it´s lower in the middle of the volcano and higher around. I think the middle should be higher because that´s were the lava comes from and because of that it should be the highest spot of the volcano.

When we drove down the volcano we did not start the engine to save gas. It was much nicer because you could here everything for example the birds and you could talk to each other. But when the mountain wasn’t steep enough we had to start our engines to keep going. The last stop we took were at a lava beach. The whole beach was black it was really cool. After that we returned our scooters and some of us went to a place called peters café. We ate some food and then it was time for dessert, on the table of 6 we ordered a total of eleven desserts, four of them were fore me because I like sweets.