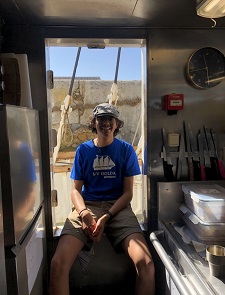 Today has been a busy, fun, tiring and very long day for me, as well as for my watch Starboard. Yesterday we all switched watches, which means my watch went from working 4–8 everyday, to 8–12. The night watch we had was honestly very tough. The rain was pouring horizontally and the wind was so strong which also caused the waves to be gigantic. Due to these waves that washed up on deck every once in a while, and the flooding rain, I was soaked from head to toe even though I wore rainproof rainwear.

Despite being wet, I wasn’t too cold because of all the work there was to do. We set sails, furled sails and braced a lot of sails. That four hours watch felt more like an eight hours watch to me… Anyways, one thing you can count on here is that you’ll fall asleep extremely quickly after doing your night watch, which is much needed!

After the night watch, and after sleeping for a few hours, we got up again at seven in the morning to eat breakfast and then get on watch again. This watch I was “post” and started as helmsman, which means I was steering the ship. Normally when steering the ship, you don’t really understand that you are the one in control of the ship, or at least I don’t since you’re on the open ocean and can’t really tell when you are changing directions and so on. But this time it felt really different, since we arrived in Cádiz and I was lucky enough to be the one steering into the harbor. It was around 08.15, no rain and the sun had just risen. I was behind the rudder and we were getting closer and closer to land. It was very exciting actually being the one to steer into harbor. At first I had a course I had to follow (which changed almost every other minute) but when we were even closer to land, the Captain gave me orders to steer in a specific amount of turns to starboard or portside.

Since we now have the 8–12 watch, we were also the ones to start having ”harbor watch”, which means we have to work and stay on the boat the entire day while the rest of our classmates have free studies and can explore the town. I was in the kitchen together with Agnes and Rasmus. We washed a lot of dishes, cleaned a lot and prepared and served lunch and dinner. We were finished with everything at around 19.15. We had a lot of fun but I was indeed exhausted when we were done.

Tomorrow we are going on a bus trip to Sevilla with the entire class which I am very excited for. According to the weather app, it is going to be sunny and hot and I’m very excited for that as well!