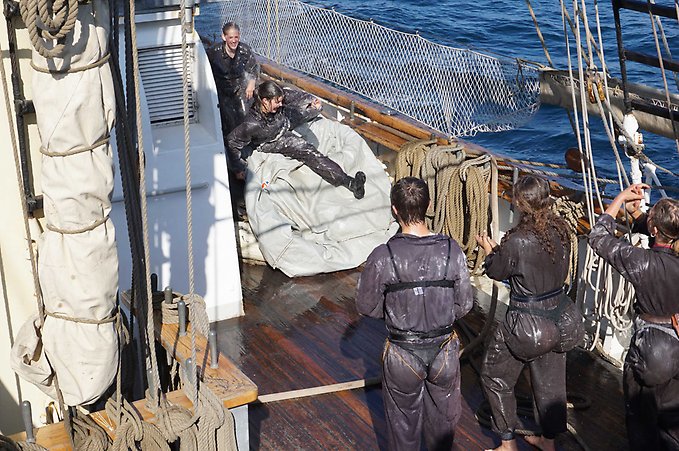 The eve of May Day

How in the world are you suppost to celebrate a holiday like the eve of May Day on a boat in the middle of the Bay of Biscay? Maybe a bonfire? I doubt that’s a very good idea. The deck is made out of wood, after all. The Chalmers cortège? That’s very far away I’m afraid. Even if my expectations was low, it turned out to be very fun day!

One of our watch leaders is very strict with traditions. As someone who has grown up in Uppsala, she had to arrange the wild-water racing. If I’m being honest, I had never heard of anything like it before. I just pretended like I knew what was happening and did what I was told to do. We were put into groups of four to five people and was given the task to come up with a dress up-theme. When the clock hit 4 it was time. Everybody gathered on main deck. I always get so amazed by the creativity the our class beholds. The dress ups was amazing. But the funnily arranged clothes did not stay on for long though, for it was time for the race. A steeplechase course had been set up with various obstacles made up by what the boat had to offer, but the most important thing was of course the water. Oh, the 13 degrees sea water. Lucky for us, it’s was a sunny and surprisingly still day at sea, so even though the water was freezing cold, it was still fun!

The celebration continued until the change of watch at 8 o’clock when it was time for the choir to sing our songs. We had been practicing everyday for nearly a week so that the parts sounded right. I had the privilege of singing soprano, which meant I sang the melody. The wind had become a bit stronger in the evening, but that didn’t stop us from dressing for the occasion. It may have been a little cold, but it didn’t stop us from singing better than ever before. And what had been set up on main deck? A bonfire! But don’t worry, it wasn’t a real one. The projector that we used for watching a movie on a sail some weeks ago was showing a bonfire, a digital one, on main deck. That made the day feel complete for me.

It was weird celebrating the eve of May Day on board, but it really was a day to remember!