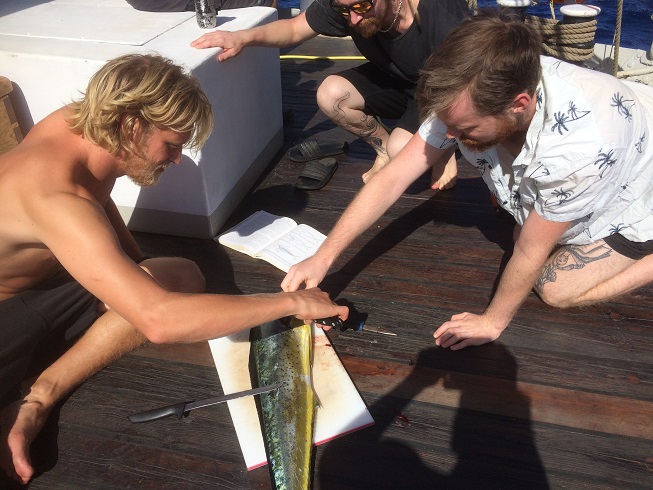 It’s only two days left on this sea leg and everyday looks almost the same as you probably read from the other blogs these past days. Wake up, eat breakfast or lunch ( that’s one of the best things with 12-4 you can choose what you want to eat), work, study, eat dinner, study, sleep, night work and it goes over and over again. I don’t know how many days like this we’ve had these past months, but it feels like a couple hundred.

The days float together and its hard to separate them, therefor small things can really make a hole day. Today we caught two gold macerals. I was helmsman (the person that steers the boat) and my friend Arvid that was lifebuoy watch saw the fishes jumping in the water and suddenly it was on the hook. They were big, I believe up to 70 centimetres. After the four-hour shift was over, I went to the poop deck and one of our crew leaders Harry was fileting the fish. He had blood up his sleeves, and it had splashed in his face to. At first, I was looking forward to eating them but then I remembered we’re leaving the boat in six days and it’s probably the next class that will enjoy the fish for dinner. But it’s fine because we’ve been eating gold maceral a couple times this voyage.

At the end of every journey we do a final cleaning and we’ve already come a long way with it. We take everything out clean it and the storages space and then but it back in. It’s still warm outside but it’s starting to get a little bit colder at night. I don’t know if I can define it as cold compared to Sweden but when you’ve been in the Caribbean for a month 25 Celsius degrees is apparently cold. But when we’re cleaning it’s still so sweaty, I’m glad we’re almost done with it. Now when we’re in such a good time we will probably have some free time in Miami.

The only thing we talk about is coming home and right now I don’t feel like I will miss these monotone days but maybe it will feel a bit empty when I get home. I can’t imagine having nothing to do or just chill for a hole day but I’m looking forward to doing it.